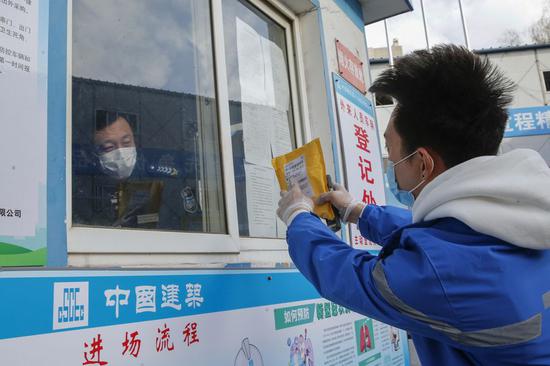 Li Jie (R), a deliveryman of ZTO Express, confirms the information on a parcel in Beijing, March 12, 2020. (Xinhua/Zhang Yuwei)

The Chinese capital will lower its emergency response to the novel coronavirus epidemic from the top level to the second level starting April 30, the latest sign of social order restoration as the epidemic conditions have been eased.

The decision was made after the city had seen no new confirmed local or imported COVID-19 cases for 13 consecutive days, said Chen Bei, deputy secretary-general of the Beijing municipal government, at a press conference on Wednesday.

On Jan. 24, Beijing activated the highest level of public health emergency response to contain the outbreak of the epidemic.

After the response level is downgraded, people from low-risk regions of China will not need to be quarantined for 14 days at home upon arriving in Beijing, Chen said. Those who are undergoing concentrated or at-home observation need not continue.

But the strict management of inbound personnel and those from high- and medium-risk areas and Hubei, the province once hardest hit by the virus, will continue.

Couriers, deliverymen, housekeepers and real estate agents with green health codes will be allowed to enter residential communities, which will remain under closed-off management, Chen said. Relative visitors will also be allowed if their health codes are green.

Libraries, museums and galleries will reopen in an orderly manner with restricted numbers of visitors, and cinemas, karaoke houses and underground gymnasiums and natatoria will remain closed.

Chen said hotels in Beijing will not require nucleic acid test results from guests, with only a green health code needed to check-in.

The response level downgrade will relax travel restrictions between Beijing and other parts of China, which is expected to boost travel and consumption during the upcoming five-day Labor Day holiday.

According to the online travel service provider Qunar, flights booked departing from Beijing rocketed by 15 times within half an hour following the announcement at the press conference, with the cities of Chengdu, Chongqing, Shanghai, Hangzhou and Changsha being the top five destinations.

Pang Xinghuo, deputy director of the Beijing Center for Disease Prevention and Control, said ordinary people can take off their masks in outdoor public venues if they are not at populated sites like school campuses and stations of public transport. Pregnant women, children and the elderly with poor immunity are still advised to wear their masks on.

Rong Jun, a spokesperson of the Beijing Municipal Commission of Transport, said under the latest emergency response level, the maximum allowable passenger capacity will be raised from 50 percent of full capacity to 75 percent on buses and to 65 percent on subway trains.

Bus services between Beijing and some areas in the neighboring Hebei Province will resume operations in an orderly manner, and inter-provincial long-distance and chartered bus services will gradually be resumed, he said.

The buses and subway carriages need to be disinfected and ventilated regularly and all passengers are required to wear masks and have their temperatures taken.

"Despite the adjustment, the prevention and control measures in Beijing remain the strictest," Rong said.

Beijing's neighboring Tianjin Municipality and Hebei Province have also announced they will lower the public health emergency response from Level I to Level II starting Thursday, by which time Hubei will be the only provincial region on the Chinese mainland that remains at the highest emergency response level.