No country can be great in isolation, Chinese UN ambassador says in op-ed 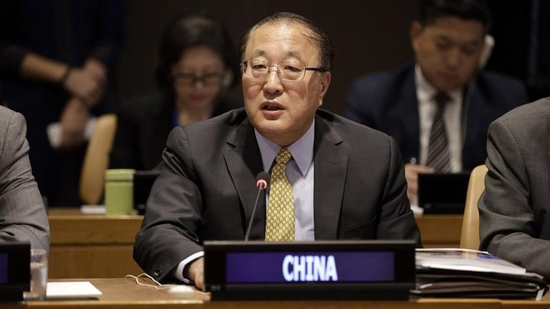 Zhang Jun, China's permanent representative to the United Nations, said in an op-ed published Tuesday by South China Morning Post that no country can be great in isolation, while stressing the importance of upholding multilateralism.

The newspaper published Zhang's op-ed titled "A lesson from Covid-19: no country can be great in isolation. Instead, we must strengthen multilateralism" on the occasion of the International Day of Multilateralism and Diplomacy for Peace, which was observed Friday.

Noting that multilateralism is not outdated, Zhang said "the Covid-19 pandemic has underlined the importance of multilateralism to all countries. After hard struggles against the disease and the loss of countless lives, humankind has finally realized that the virus knows no borders, or race."

Zhang said the world faces a long list of formidable challenges, including armed conflicts, terrorism and climate change, adding that the global economy is plagued with uncertainties, as the spread of protectionism is disrupting global supply and industrial value chains and undermining world trade.

"This is compounded by acts of bullying, which are jeopardizing global peace and stability. We have no choice but to strengthen multilateral cooperation," he said.

"All countries, big or small, need multilateralism. In a world of interdependence, no one can escape a major challenge or get through it on its own. No country can make itself great in isolation," he added.

"In fact, big countries have a bigger stake in multilateral cooperation, because they usually have more expansive interests around the world, from investment to trade, from protection of nationals to public security. And they need to behave in a way that befits their status," said the envoy.

Noting that the trust deficit is the biggest crisis, the ambassador said that "trust, especially trust between major countries, is the foundation of effective cooperation and a prerequisite of coordinated action. This virus is terrible. Yet, what is more terrible is a political virus, such as a Cold War mentality or a zero-sum game, which harms everyone."

"Trust is built on mutual respect. China respects and learns from Western countries to work for shared prosperity. Western countries, for their part, need to respect the choices of the Chinese people and welcome the progress of a major country in the East, one with a different system from theirs," he said.

He also called for equality. "Developing countries constitute the vast majority of the UN membership, and their rights should be fully guaranteed in global governance. Only when all parties engage on an equal footing will multilateral mechanisms have vigor and synergy, and succeed in maintaining international fairness and justice," he said.

"Achieving equality requires strong determination and sustained efforts. In this regard, China's Belt and Road Initiative follows the principle of consulting together, building together and sharing together, which is a true demonstration of equality of all," he added.

The envoy also said benefits for all are important.

"The biggest advantage of multilateral cooperation is that resources and strength can be mobilized to the greatest extent in joint responses to global challenges. This will benefit more countries, especially vulnerable ones, and ensure no one is left behind," he said.

"In combating Covid-19, solidarity for the mutual benefit of all is even more important. All countries should cherish the assistance received and try to help others. China is proud to have provided medical supplies to over 140 countries and international organizations, and will continue to help," said Zhang.

"We live in one world and have a shared future. Covid-19 will not be the last pandemic we have to face. Stronger and better multilateral cooperation is key to winning the battle, all the time. Now more than ever, it is a lesson that we cannot afford to ignore. Supporting multilateralism is supporting ourselves," said the ambassador. Enditem