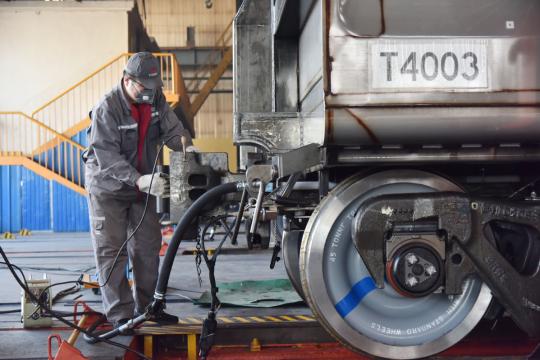 An employee works at the workshop of CRRC's subsidiary in Qiqihar, Heilongjiang province. (Photo/Xinhua)

Urban rail development is expected to be the key to sustaining China's investment on a long-term basis, as it can integrate elements from both traditional and new infrastructure projects to support the country's economic growth, industry experts said.

Opportunities in the sector have risen sharply after the National Development and Reform Commission, the nation's top economic regulator, gave the green light for urban rail development projects in three cities during the first quarter of this year, including Hefei in Anhui province and Shenzhen in Guangdong province. The three projects involved a total investment of 224.8 billion yuan ($31.74 billion).

In 2019, the country's top economic regulator approved urban rail projects in six cities such as Chengdu in Sichuan province and Changchun in Jilin province for a combined investment of 682.83 billion yuan.

To offset the economic slowdown caused by the COVID-19 outbreak and foster fresh momentum, the government's investment focus this year has shifted from building infrastructure facilities such as roads and airports to projects improving people's livelihood, public services and technology-based new infrastructure, said Liu Ruiming, a researcher at the National Academy of Development and Strategy at the Renmin University of China in Beijing.

Urban rail projects need longer time for construction, installation and testing of communication signal systems, as well as maintenance operations, he said, adding it normally takes four to five years to complete and run such projects. The trains, network operations and services will be more advanced after adopting the latest 5G technology and big data technologies, as well as smart city and logistics-related solutions.

Unlike traditionally defined infrastructure such as highways and power stations, the new projects include new infrastructure for digital transformation, intelligent upgrades and innovative development, data from the NDRC showed.

Since the operational range of urban rail lines in metropolises such as Beijing and Shanghai has reached a certain scale, the intercity rail transit markets in cities within regional clusters including the Beijing-Tianjin-Hebei area, regions of the Yangtze River Delta and Pan-Pearl River Delta will be boosted to enhance regional connectivity, said Wang Jun, a researcher at the China Center for International Economic Exchanges in Beijing.

Chen Fenjian, chairman of China Railway Construction Corp, one of the country's main railroad builders by sales revenue, said as the country plans to strengthen the support of the transportation network, including the construction of a multilevel rapid transportation network based on rail transit and expressways in city clusters and metropolitan areas, the expansion of metro networks is helpful to form new spaces to stimulate high-tech, retail, services and private sectors, as well as the exports of Chinese trains and construction projects.

China Railway Rolling Stock Corp, the country's largest train maker by market share, said that it had signed contracts for supplying metro vehicles and providing maintenance services to both domestic and global subway operators in cities including Xi'an, Hangzhou and Bengaluru in India during the first four months of this year, with a total contract value of 9.98 billion yuan, according to its latest fiscal report released last week.

Because both high-speed railway and urban railway services currently are facing a tough challenge－cutting operating costs, it is important for their owners to further lower the expenditure in this section through the next-generation trains, modern management and digital solutions, said Liu Hualong, chairman of CRRC.