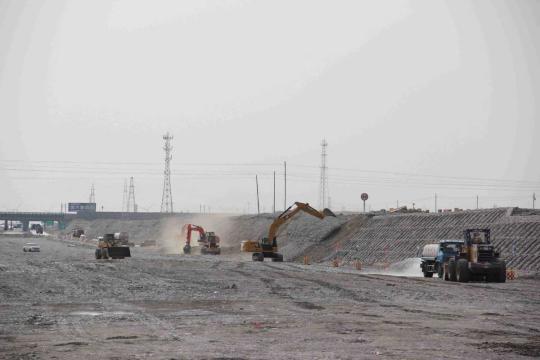 The expansion of the G30 Xiaocahu-Urumqi section has officially resumed. The project is expected to shorten the travel time from Urumqi to Xiaoca Lake in Turpan to one hour when completed by the end of August. (Photo provided to chinadaily.com.cn)

The Xinjiang Uygur autonomous region expects to invest more than 54.2 billion yuan ($7.85 billion) in its transportation infrastructure, with plans to complete work on14 highways this year.

Of the 14 projects, expressway S21 that will connect Altay, in the northwestern part of the region, with Urumqi, the region's capital, is in the public spotlight, as Altay is one of the most popular tourist sites in the region.

"The current highway linking Altay and Urumqi is more than 600 kilometers long. After the completion of the S21 expressway in 2022, the distance will be reduced to 342 kilometers, which only takes four hours," said Luo Xiaogang, director of the project.

Construction on 35 highways in the region that were already underway will continue this year.

One of those, the G0711, a 1,300-kilometer highway from Urumqi to Yuli county in Bayingolin Mongol autonomous prefecture, restarted early in March after being suspended for a month because of the outbreak of COVID-19.

"The six-year construction plan of the G0711 is expected to be complete in 2023, and people will see the world's longest highway tunnel — 22.11-kilometers — that crosses the Tianshan Mountains," said Su Yanlin, manager of the project.

The total length of highways in the region will exceed 5,500 km in 2020, according to the regional transportation department.