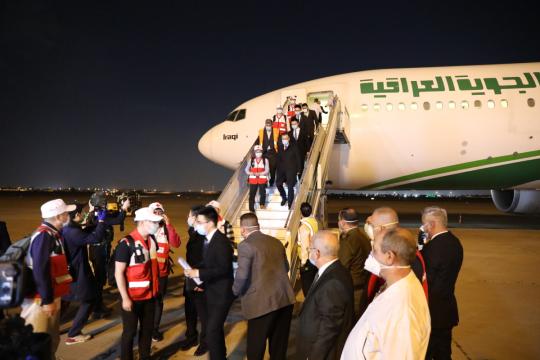 An expert team dispatched by the Red Cross Society of China arrives in Iraq to support the Middle Eastern country's fight against COVID-19, on March 7, 2020. (Photo provided to chinadaily.com.cn)

State Councilor and Foreign Minister Wang Yi said on Monday that China is paying close attention to the global development of the novel coronavirus pneumonia epidemic and that international cooperation is imperative in tackling the threat.

Wang made the remark in phone calls with his counterparts from Nepal, the United Kingdom and Iraq, the Foreign Ministry said.

Iraqi Foreign Minister Mohamad A. Alhakim told Wang that Iraq and China have a long-standing friendship. At the most critical moment of the Iraqi people's fight against COVID-19, China provided selfless assistance by sending Baghdad supplies and a specialized medical team, he said.

Wang said COVID-19 is breaking out around the world with multiple sources, posing new challenges.

Guided by the belief that mankind is a community with a shared future, China works not only to protect its own people, but also step up international and regional cooperation to contribute its part to global public health security, he said. He added that China is ready to provide more help to the best of its ability.

In talking with UK First Secretary of State and Foreign Secretary Dominic Raab, Wang said the epidemic is under control in China. Wang said through its efforts, China has not only protected its own citizens but gained time for other nations.

He expressed thanks to the UK's royal family, government and people for supporting China during the epidemic. Wang and Raab agreed that the two nations should develop a global health partnership.

In another development, Foreign Ministry spokesman Geng Shuang announced that a video conference was held Tuesday with diplomats and public health officials and experts from China and 10 Pacific island countries to share information on combating COVID-19.

"China is willing to provide assistance within its capability to Pacific island countries to jointly win the battle against the epidemic and promote the building of a community with a shared future for mankind," Geng said at a daily news briefing.

Commenting on a meeting attended by health ministers in the Southern African Development Community, Geng said African countries and their people have firmly stood with China during its fight against the novel coronavirus.

"It is very touching that some countries in Africa have provided us financial and material assistance given their own limited conditions, which fully reflects the brotherhood between China and Africa," he said.

Given that African countries still face high risks from imported infections and some nations have reported confirmed cases, China is willing to provide support and assistance within its capability to jointly contribute to regional and global public health safety, Geng said.