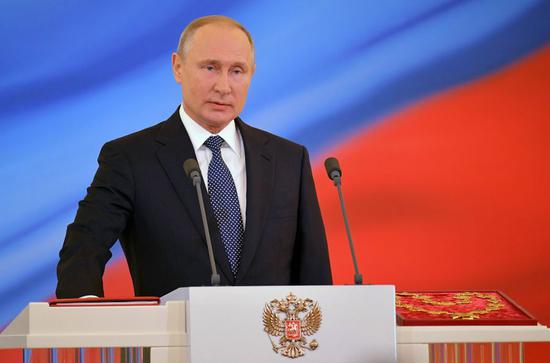 Russian President Vladimir Putin addresses his inauguration ceremony in Moscow, capital of Russia, on May 7, 2018. (Xinhua/Sputnik)

Russian President Vladimir Putin said Tuesday that he may participate in the 2024 presidential race if the country's Constitutional Court approves it.

At a plenary session of the State Duma, the lower house of parliament, in a discussion during the second reading of a bill on constitutional amendments, lawmaker Valentina Tereshkova proposed to drop restrictions on the number of presidential terms, which is currently two in a row.

"In principle, this variant would be possible, but on one condition, namely, if the Constitutional Court officially rules that such an amendment will not contradict the principles and main provisions of the constitution," Putin said at the meeting.

Putin said he could run for presidency in open elections with competitors and "if citizens support this proposal, this amendment, and say 'yes' in the referendum (on constitutional amendments) on April 22."

After the meeting with Putin, whose current presidential term ends in 2024, the State Duma supported nullifying the limits on the number of presidential terms by passing the bill in the second reading.

The third and final reading is scheduled for Wednesday. If passed, the bill will be sent for the endorsement of the Federation Council, the upper house of parliament.

The amendments will be finally decided in the April referendum.