Past decade warmest ever: WMO report 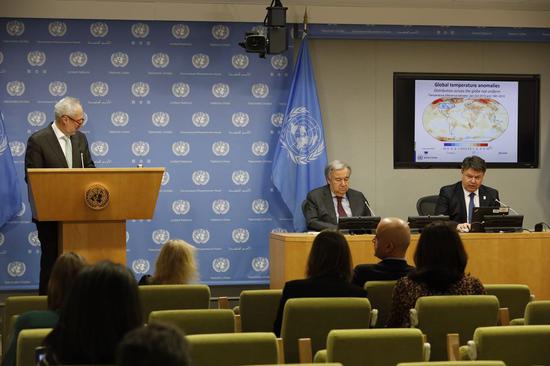 The decade of 2010-2019 was the warmest on record, and 2019 was the second-warmest year ever, according to a report of the World Meteorological Organization (WMO).

It finds that 2015-2019 are the five warmest consecutive years on record.

Since the 1980s, each successive decade has been warmer than any preceding decade, according to the WMO Statement on the State of the Global Climate in 2019, which was jointly launched on Tuesday by UN Secretary-General Antonio Guterres and WMO chief Petteri Taalas at the UN Headquarters in New York.

2019 ended with a global average temperature of 1.1 degrees Celcius above estimated pre-industrial levels, second only to the record set in 2016, when a very strong El Nino event contributed to an increased global mean temperature atop the overall warming trend, according to the report.

Without the role of El Nino in 2016, 2019 would have been the hottest year on record, said Taalas.

Guterres said that 2020 is a pivotal year for climate action in the context of the UN Climate Change Conference in Glasgow, Scotland.

"We have no time to lose if we are to avert climate catastrophe," he said. "We have to aim high at the next climate conference in Glasgow in November. We need all countries to demonstrate that we can achieve emissions reductions of 45 percent from 2010 levels this decade, and that we will reach net-zero emissions by mid-century. And we know this is the only way to limit global heating to 1.5 degrees Celsius."