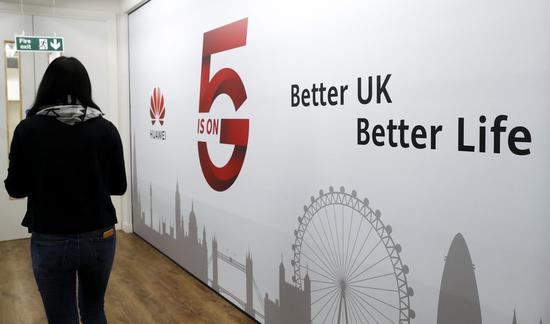 The British government on Tuesday defeated an amendment proposed by a group of Conservative MPs trying to stop local telecommunications operators from using "high risk vendors" in the near future.

According to the proposed amendment to the Telecommunications Infrastructure Bill, local operators will not be allowed to use "high-risk vendors" in their networks after Dec. 31, 2022.

Without naming Huawei, the amendment is widely seen by local media to target the Chinese technology company, a Shenzhen-based networking and telecommunications equipment and services supplier.

In January, the British government approved a restricted role for Huawei in building the country's 5G network.

Responding to the defeated amendment, Victor Zhang, vice president of Huawei, said: "The government has examined the evidence and concluded that Huawei should not be banned on cyber security grounds and two parliamentary committees have done the same and agreed."

"An evidence-based approach is needed, so we were disappointed to hear some groundless accusations asserted. The industry and experts agree that banning Huawei equipment would leave Britain less secure, less productive and less innovative," Zhang said in a statement provided to Xinhua.

"If Huawei is banned from some countries, I think it's to no one's real benefit," Kester Mann, director of consumer and connectivity from CCS Insight, told Xinhua in a previous interview. CCS Insight is a research and advisory company focused on the mobile communications sector.

Huawei has been awarded over 90 commercial 5G contracts and shipped over 600,000 5G Massive MIMO Active Antenna Units worldwide, according to figures released by the company last month.