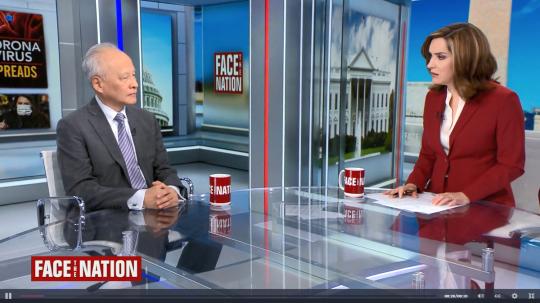 A screenshot of Cui Tiankai, Chinese ambassador to the United States, on Face the Nation on CBS News Sunday. (Photo provided to chinadaily.com.cn)

"We certainly welcome American experts to join the group the WHO is assembling, and I'm sure they will be going to China very soon," Cui said Sunday on Face the Nation on CBS News, when he was asked why Beijing seemed to "ignore those offers" of the U.S. to send experts to help out.

As to the formation of the expert team, China is coordinating with the WHO because a lot of things are done under the auspices of the World Health Organization, Cui said. "America experts are on the list recommended by the WHO, which China certainly respects," he said.

There have been frequent and regular contact between the U.S. Centers for Disease Control (CDC) and its Chinese counterpart, and some American experts have come to China already on their own individual basis, according to Cui.

"So there's ongoing contact, not only between the two governments but also between the two CDCs and between the academic institutions," the envoy said, adding that some American companies are also offering help.

"I've just been at the airport seeing off members of an advance team for the @WHO-led #2019nCoV international expert mission to #China, led by Dr Bruce Aylward, veteran of past public health emergencies," Tedros wrote on Twitter.

It's not immediately clear the size of the complete WHO-led team, but Alex M. Azar II, secretary of the U.S. Department of Health and Human Services, said the U.S. has offered 13 of the 25 names that the World Health Organization provided to China.

The U.S. members are drug development experts and epidemiologists, Azar told a news briefing in Washington on Friday.

"In the very near future, we hope, they will be able to work with their Chinese counterparts and other international experts on the ground in China," Azar said.

He also said that U.S. scientists and public health experts are trying to learn more about the virus using the data they have from China and the cases reported in the U.S..

As Sunday, the death toll from the outbreak reached 908 on the Chinese mainland, where there were 3,062 new confirmed infections on Sunday, bringing the total to 40,171, China's National Health Commission said Monday.

The Chinese ambassador also categorically refuted claims about the origins of the coronavirus, calling any theories it is linked to biological weapons research "absolutely crazy".

"I think it's true that a lot is still unknown and our scientists — Chinese scientists, American scientists, scientists of other countries — are doing their best to learn more about the virus," Cui said.

"But it's very harmful, it's very dangerous to stir up suspicion, rumors and spread them among the people. For one thing, this will create panic. Another thing, (is) that it will fan up racial discrimination, xenophobia, all these things, that will really harm our joint efforts to combat the virus," he said.

The United States announced Friday it stands ready to spend up to $100 million to assist China and other countries affected by the novel coronavirus epidemic.

The U.S. State Department helped deliver nearly 17.8 tons of donated medical supplies to the Chinese people, including masks, gowns, gauze, respirators and other vital materials, according to a statement from the State Department.