"Wherever you are, the motherland is always behind you, welcome home!"

This was the broadcast on a plane piloted by Zhong Rui on Xiamen Airlines Flight MF818, which picked up Chinese citizens stranded in the Philippines due to the coronavirus outbreak.

Xiamen Airlines applied for six flights from East China's Fujian province's Quanzhou to Manila, capital of the Philippines, making the back-home flights available from Wednesday to Monday. Thanks to this effort, about a thousand Chinese tourists stranded in the Philippines are going to go back home.

Zhong, from Longyan in Fujian province is mainly responsible for routes from China to Southeastern Asia. The 34-year-old Zhong has more than 10 years of flying experience after he graduated from Civil Aviation Flight University of China and joined Xiamen Airlines in 2010 before he became a pilot in 2014.

As one of the excellent pilots in Xiamen Airlines, Zhong was recognized for his work to keep flight safety in 2017 and 2019, respectively.

Zhong usually spends the Spring Festival holiday with his wife and two sons. But he happened to be on duty this year. 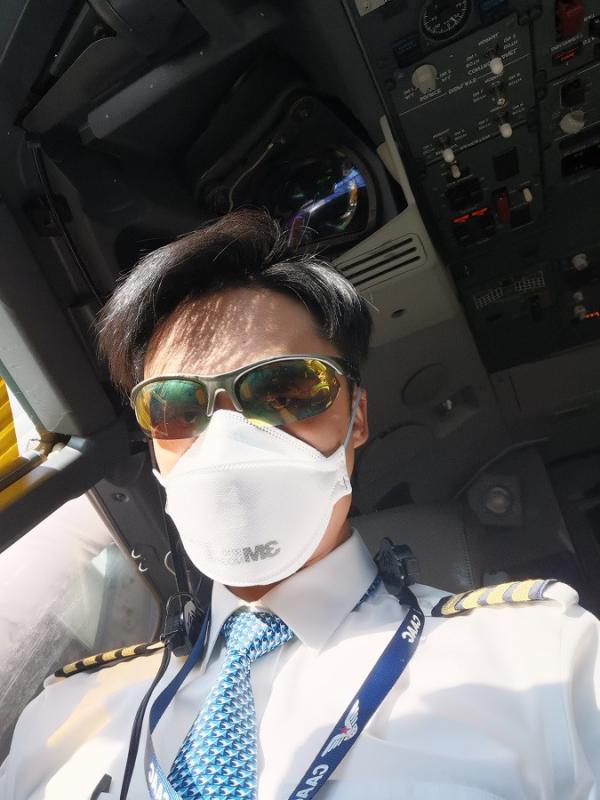 During the three days of flights to the Philippines from Wednesday to Friday, Zhong said he was already used to these routes since it's part of his daily routine at work.

"It's actually my first time to fly with a mask, but I was not afraid to carry out this task at all. I'm quite optimistic," he laughed.

Zhong said his flight to Jakarta was canceled before he was informed by the airlines on Feb 4 that he was going to pick up stranded travelers in the Philippines.

His family gave him their full support for the special task, including his wife.

"She told me I should stand up at this critical time as a Party member for dozens of years. She can take good care of the family. I have her support," said Zhong.

Zhong's parents also share the same view, and told him to protect himself and accomplish his work. Zhong's father works at the epidemic prevention station in Changting, a county in Longyan city in eastern Fujian province, fighting at the front line. So he understands his son's situation.

For the flight to Manila, Zhong said the most important thing is to communicate with the crew and ensure prevention and protection work. "I understand the anxiety of the stranded travelers there, because they have no idea when they are able to go home since all flights were canceled suddenly," he said.

Zhong said he couldn't guarantee that there was no suspected case of the infection among so many passengers. Therefore, he pays special notice to avoid panic and movement among the passengers if something happens. The safety of the whole crew and the passengers was guaranteed in the journey.

Fortunately, things at Manila International Airport run smoothly. Zhong said there's no sign of discrimination or segregation from the airportstaff in the Philippines.

"As the first flight picking up stalled Chinese, we received heartfelt warmth from workers in the airport in the Philippines and were deeply touched," he said.

"In fact, there were two passengers with a ,fever including one from Hubei province. Both of them boarded the plane first, with their temperature monitored many times. Other passengers boarded afterwards after the two were confirmed with no travel history to Wuhan."

"The two with fever had it likely caused by interior stuffiness or their nervousness," he said.

Crew members made sure that all passengers wore their masks properly and maintained order in the cabin.

Landing at Quanzhou Jinjiang International Airport in Fujian province, other passengers were allowed to get off after the two with the symptoms of fever were proved healthy through a thorough, 20-minute check by quarantine inspectors. All passengers received health checks each time.

After seeing the passengers' exciting faces when landing home, Zhong also gave himself a thumbs-up.

"The successful accomplishment of the mission means a lot to me. It's a test both on my professional and psychological state," he said.

Accomplishing this special task, Zhong will go to Xiamen and be with his family.

"I have to get a self-check to see whether I have to quarantine myself at home."

Zhong Rui also provides some suggestions to his colleagues. For pilots, he suggested not panicking or burdening themselves too much. It will be OK if they wear masks properly. Flight attendants, since they have frequent contact with passengers, have to pay special attention to virus prevention.