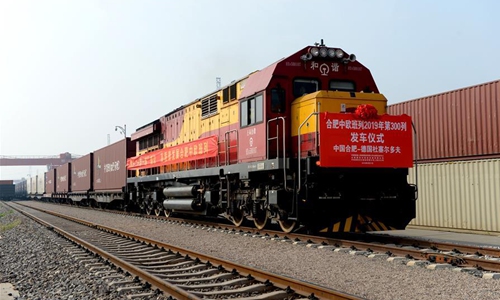 A freight train bound for Dusseldorf of Germany departs from a logistics base in Hefei, east China's Anhui Province, Sept. 27, 2019. The train X8020 carrying household electrical appliances and mechanical equipment departed from the logistics base of Hefei north railway station on Friday, marking the 300th trips of the two-way China-Europe freight trains in Hefei this year. (Xinhua/Huang Bohan)

During the meeting on the sidelines of the Berlin Conference on Libya, Yang said President Xi reached important consensus with Michel on deepening the China-EU comprehensive strategic partnership, which has guided a smooth transition of China-EU relations and charted the course for the development of bilateral ties in the next phase.

Yang, also member of the Political Bureau of the Communist Party of China (CPC) Central Committee and director of the Office of the Foreign Affairs Commission of the CPC Central Committee, told Michel that China and the EU need to strengthen communication, coordination and cooperation and work together to safeguard multilateralism to ensure the China-EU comprehensive strategic partnership moves forward steadily.

It not only conforms to the common interests of both sides, but will also bring more stability, certainty and positive energy to the world, added Yang.

He noted that China is willing to make joint efforts with the new EU institutions to make sure a series of important agendas between China and the EU this year will be successful and promote the active and healthy development of the four China-EU partnerships featuring peace, growth, reform and civilization.

Michel said it is an extremely important year for both the EU and China as the two sides have many key political agendas.

The EU side is willing to maintain close communication and coordination with China and push for positive outcomes in priority areas of cooperation such as economy, trade and investment.

Michel said that the EU views China as a key partner and it is ready to work with China to implement multilateralism and better address climate change and other global challenges.