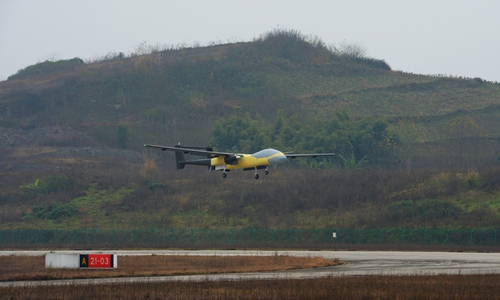 Independently developed by China, the world's first large, three-engine utility drone recently made its first flight, with experts saying on Sunday that the drone is very reliable and versatile thanks to the extra engine, and can be used in transport and attack missions.

Developed by Chengdu-based Tengden Technology Co, the drone took off and landed on Thursday morning at an airfield in Southwest China, marking its successful maiden flight, Chengdu Daily reported on Friday.

The drone is a three-engine variant of Tengden's twin-engine TB Twin-tailed Scorpion, as this design is a world first for drones, Chengdu Daily said, without introducing the designation of the new variant.

The drone has a width of 20 meters and a length of 11 meters. It is equipped with three piston engines, with one under each wing and one on its tail, enabling it to have a maximum takeoff weight of 3.2 tons and an endurance of 35 hours, according to the report.

The drone has a flight ceiling of 9,500 meters, a max climb rate of 10 meters a second and a top speed of more than 300 kilometers an hour, the report said, noting that it is very adaptable and can be deployed in airfields in plateau areas.

Because the drone uses piston engines, which are low cost but have long lifespans, it is also very cost efficient.

The extra engine makes this new drone more powerful, capable of carrying more payload and taking off at shorter ranges, a military expert who asked not to be named told the Global Times on Sunday.

This enables the drone to be used for a wider range of purposes, such as logistics and transport, in addition to traditional drone purposes including patrols, reconnaissance and attack, the expert said.

If one or two engines malfunction, the remaining engine should still be enough to allow the drone to fly safely, making it very reliable, the expert said.

The drone will be "put into market in all fronts" in 2021, chinanews.com reported.