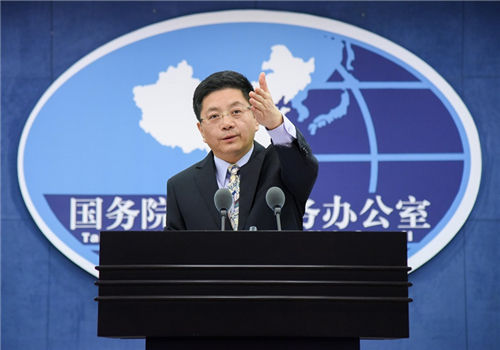 The one-China principle is the unshakable foundation for the relations between the two sides of the Taiwan Straits, Ma Xiaoguang, a spokesman for the State Council's Taiwan Affairs Office, said on Wednesday.

Ma was responding to Tsai Ingwen, who spoke after her reelection on Saturday as Taiwan's leader. She said that "peace, parity, democracy and dialogue are the key to positive cross-Straits interactions and long-term stable development".

Tsai, who heads the Democratic Progressive Party, said the four words mean that the mainland should abandon threats of force against Taiwan and accept Taiwan's existence. She said the future of Taiwan must be decided by its people, and both sides of the Straits must be able to discuss future development.

Ma said that "the future of Taiwan lies in national reunification".

Ma said the 1992 Consensus, which embodies the principle of one China, is the unshakable foundation for the peace and stability of cross-Straits relations, and shaking it is more difficult than shaking a mountain.

He said forces seeking "Taiwan independence" are the biggest threat to peace and stability and that they imperil the well-being of all compatriots on both sides.

Ma said the DPP authorities have refused to recognize the 1992 Consensus since they took office in 2016. They have undermined the common political basis for the development of cross-Straits relations, supported Taiwan separatists, relied on foreign forces to build themselves up and opposed the mainland by blatantly provoking cross-Straits hostility.

He added that these are the fundamental causes of the deterioration of relations and the suspension of dialogue, and they have made the situation more complicated.

"The election does not change the fact that Taiwan is part of China," Ma said, adding that policies toward Taiwan will not change. Only by adhering to the consensus will the interests and welfare of Taiwan compatriots be enhanced, he said.

"National reunification is a trend that cannot be stopped by anyone or any force. We have the will, confidence and ability to thwart any form of independence and will never allow anyone, any group or any political party to separate Taiwan from China－not at any time or in any form," he said.

Ni Yongjie, deputy director of the Shanghai Institute of Taiwan Studies, said Tsai's election victory means she will continue to confront the mainland or even create conditions for decoupling, which is definitely not good for cross-Straits relations.

"We should not underestimate our Taiwan compatriots," he said, because a large number of people support parties that favor peace and stability.

Cross-Straits relations will not make positive progress politically with Tsai at the helm, he said, but exchanges between people and cities will not be hindered and are likely to increase.

"We should not underestimate Taiwan people's need for better cross-Straits relations, nor the impact of the mainland's preferential policies toward Taiwan or the efforts made by mainland people," he said.