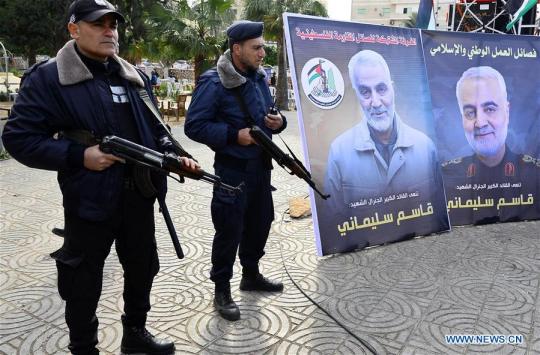 The possibility of war between the United States and Iran is relatively low, while prospects for future talks and negotiations are high, despite the earlier uncertainties arising from Washington and Teheran's rhetoric, an expert said.

Even after U.S. military facilities were hit by Iran in revenge for the U.S. killing of a top general, President Donald Trump appeared to be sending signals that de-escalation is desirable.

That message seemed to be part of Trump's televised address on Wednesday in which he said the U.S. is "ready to embrace peace with all who seek it", said Dong Manyuan, a Middle East studies expert at the China Institute of International Studies.

Trump opened his address by saying that "as long as I am President of the United States, Iran will never be allowed to have a nuclear weapon".

He also threatened to "immediately impose additional punishing economic sanctions" on Iran in response to any aggressive action.

While Trump's tone was harsh with respect to sanctions, he said the U.S. did not necessarily have to hit back. He also said that Teheran appeared to be standing down, calling it "a good thing" for all parties concerned.

Dong said Trump would not want to declare war on Iran and has shown reluctance to involve the U.S. in Middle East conflicts since he became president.

"Trump didn't have the full chance to win," Dong said. "What's important is that reelection is Trump's current priority, and that requires him to gather sufficient resources. A war may distract from his concentration."

Moreover, a U.S. choice to avoid war also meets the demands of its regional allies, he said.

"If the U.S. were to wage a full-scale war, it would need the support of its regional allies. However, the common mentality of those allies is to avoid war and seek peace, which has also created conditions for the relaxation of regional tensions," Dong said.

Arab states, which lie across the Persian Gulf from Iran and fear that their region could be dragged into another conflict, called for cooler heads to prevail in Iraq and beyond.

"The brotherly Arab nation of Iraq today is in need of solidarity among its people to avoid war and becoming the site of a battle in which it would lose most," Saudi Arabia's Foreign Minister Prince Faisal bin Farhan Al Saud wrote on Twitter.

At the same time, Iran has an urgent need for a peaceful and stable environment for its economic development, Dong said. "Thus, it is crucial for Iran to have some degree of reconciliation with its main opponent."

Meanwhile, Trump urged world powers to quit the 2015 nuclear accord with Iran. The U.S. withdrew in May 2018 and has tried to promote a new agreement, in Trump's words, to make the world "a safer and more peaceful place" and allow Iran "to thrive and prosper".

Chinese Foreign Ministry spokesman Geng Shuang reiterated on Thursday that all parties should exercise restraint and resolve disputes properly and peacefully through dialogue and negotiation under the United Nations Charter and basic principles of international relations.

He said it was extreme U.S. pressure on Iran that had created the tension in the Middle East and that unilateral withdrawal from the nuclear deal showed ignorance of international law.

"The comprehensive agreement did not come easily. It is a crucial achievement of multilateral diplomacy, a support for peace and stability in the Middle East and an important part of international law," Geng said.

He also urged the international community to proceed with a long-term perspective and promote the easing of tensions in the region.

Majid Takht Ravanchi, Iran's ambassador to the UN, dismissed as "unbelievable" what he said was Trump's call for cooperation, given that Washington was imposing sanctions on Teheran, Iran's state news agency, IRNA, reported on Thursday.

The Wednesday strikes by Iran caused no casualties to U.S. troops and damage was minimal, Trump said, contradicting an Iranian state television presenter who previously claimed that "at least 80 terrorist U.S. soldiers" were killed and helicopters, drones and other equipment were damaged.

The U.S. Department of Defense said Iran had launched 16 short-range ballistic missiles, at least 11 of which hit Iraq's al-Asad Air Base. One hit a facility in Irbil but caused no major damage, it said.