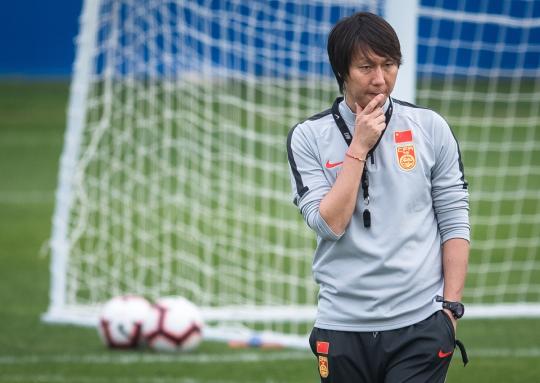 The Chinese Football Association has confirmed Li Tie as Team China's new head coach, but warned that a fundamental change in mindset, not just personnel, is required if the nation is to end its wait to qualify for a World Cup.

The former China international and Everton midfielder was on Thursday appointed as the permanent successor to Italian Marcello Lippi, having initially been installed on a caretaker basis following Lippi's resignation in November.

"The Chinese Football Association will fully support head coach Li Tie and his team. We believe with coach Li at the helm, the national squad will maintain its honor and stick to its mission," read a CFA statement published on Weibo on Thursday afternoon.

"The coach intends to lead the squad with rigorous and scientific training, and will be prepared for the games to come.

"Li Tie is an outstanding representative of Chinese soccer."

Shenyang-born Li was a member of the only Chinese squad to ever play at a World Cup, in 2002. At club level, he began his career at hometown club Liaoning before moving to England, where he made 40 appearances for Premier League club Everton in four seasons.

After retiring as a player, he began his coaching career at Guangzhou Evergrande as an assistant to Lippi before taking head-coaching position at Hebei China Fortune and Wuhan Zall.

"Previously, many people wanted Team China to have a world-class foreign coach, as they believed as long as we could find such a coach, Chinese soccer could make a breakthrough," Liu told Xinhua.

"But even by hiring such expertise, China could not rely solely on the head coach.

"The idea that a world-class coach will be a game changer must be changed. We have to solve the problem that the national squad has struggled to win significant games since 2002. That needs a change of our system and mindset."

Liu added that the CFA plans to establish a comprehensive support team for the national squad, which will include conditioning and tactical coaches, sports science experts and a psychology team.

News of Li's appointment went viral on Chinese social media, with related topics viewed over 30 million times on Weibo within an hour of the CFA announcement.

The 42-year-old had been widely expected to get the role on a full-time basis after temporarily taking charge of the squad for December's East Asian Football Federation E-1 Championship in South Korea.

Team China, which is eight points adrift of Group A leader Syria, resumes its campaign in March with easy-looking games against the Maldives and Guam. However, crunch clashes against the third-place Philippines and Syria in June look set to decide China's fate.

One of Li's priorities will be trying to rebuild the squad's damaged morale.

He will begin that task at a training session in Guangzhou on Sunday with a 39-man squad that does not include star striker Wu Lei, who is omitted due to his club commitments with Espanyol in Spain, or 39-year-old veteran Zheng Zhi, whose international career would now appear to be over.