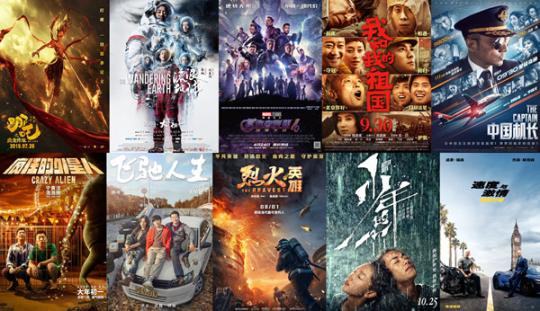 Posters of the top 10 highest grossing films of 2019 in China. The total movie ticket sales at the box office on the Chinese mainland in 2019 hit a record 64.3 billion yuan ($9.2 billion), growing by 5.4 percent from the previous year.(Photo/China.org.cn)

According to the China Film Administration on Tuesday, domestic films grossed 41.2 billion yuan in 2019, which is 64.07 percent of the annual total gross revenue of both domestic and foreign films in the market, and a significant 8.65 percent increase from last year.

In 2019, China produced a total of 1,037 films. To break this down further, 850 were feature films, 51 animated films, 74 science education films, 47 documentary films and 15 special-format films (including 4D and Dome-screen films). However, many of the locally produced films never made it to physical cinemas. Of the 88 films that each had box office sales of beyond 100 million yuan in 2019, 47 were domestic films, the administration said.

"The Wandering Earth," a film adaption of a Chinese science fiction novel by the Hugo Award-winning author Liu Cixin, came in second on the chart with 4.68 billion yuan, followed immediately by Disney and Marvel Studios' "Avengers: Endgame," which grossed around 4.25 billion yuan.

Hollywood blockbusters lost a lot of its glamour as well as percentage share in the Chinese market as China-made productions grew from strength to strength last year. There were only two Hollywood movies that made it to the top 10 earnings list in 2019. "Fast and Furious Presents: Hobbs and Shaw" is one of them and took the 10th spot with 1.43 billion yuan in box office sales.

The China Film Administration shared that admissions in urban cinema chains reached a whopping 1.73 billion in 2019. It also added that China installed 9,708 new screens in 2019, making the total number of cinema screens on the Chinese mainland now 69,787. China currently has the most cinema screens of any country in the world.