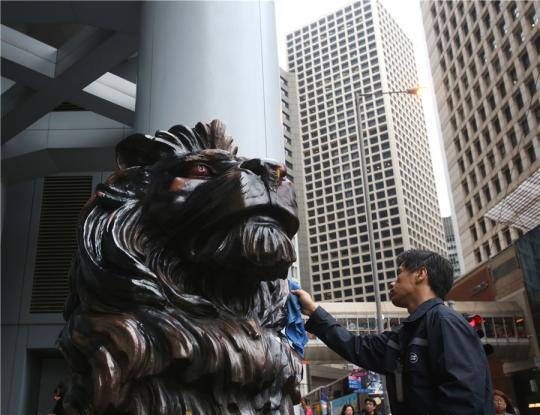 A worker cleans the lion sculpture that was vandalized by rioters outside an HSBC Bank branch in Hong Kong on Thursday. (China Daily/PARKER ZHENG)

For many, what happened in Hong Kong in the past six months was unimaginable. Who would believe that in a city that boasts order and justice, a government initiative to amend a legal loophole would spark protracted protest violence, pushing the city to the brink of collapse?

Yet, it did happen, and it shows no signs of ending. During the mayhem, what used to make Hong Kong people proud has been relentlessly trampled on. Anarchy replaced order. Radicalism defeated rationality. And lies covered up facts. Hatred grew like plague, with no end in sight.

What remains is a polarized society, a battered economy, and growing uncertainty. Amid the depressing atmosphere, quelling violence and restoring order seems to be the only remedy.

The chain of events was triggered by a murder case outside Hong Kong.

After allegedly killing his girlfriend in Taiwan in 2018, Hong Kong resident Chan Tong-kai fled to his hometown and was arrested on suspicion of money laundering. Despite his confession, the Hong Kong police could not charge him with murder because the city has no jurisdiction over an offense that occurred elsewhere.

To uphold justice, the Hong Kong government proposed amending the city's extradition laws, and introduced the bill in the city's Legislative Council in April.

The bill was expected to enable the city to surrender fugitive offenders on a case-by-case basis to worldwide jurisdictions it has no longterm agreements with.

However, the bill triggered massive demonstrations in mid-June.

Responding to public sentiment, the government suspended all work on the bill and declared its death in early July. On Sept 4, the Chief Executive Carrie Lam Cheng Yuet-ngor announced formal withdrawal of the bill.

The concession did not pacify the protesters. They escalated the campaign into wanton violence and vandalism to vent their anger.

As hatred kept polarizing society, rioters were determined to clear all obstacles in the way of "seeking freedom and democracy", whether they are police officers, civic leaders, or even ordinary people holding different views.

The city's law enforcers have probably borne the most brunt of the protesters' anger. Over 500 police officers have been injured. In some cases, an officer's neck was slashed, another officer's finger was bitten off, and an off-duty policeman was stabbed several times.

Besides, more than 2,000 police officers and their family members have been doxxed for months. Doxxing is disclosing publicly the personal details of an individual as a form of online harassment.

Politicians also suffered. When canvassing votes for the District Council election in November, pro-establishment lawmaker Junius Ho Kwan-yiu was stabbed in the chest. Two of his colleagues were also injured.

Some bystanders also faced protesters' ire for expressing disapproval against violence. A man was set on fire by rioters and hospitalized in a critical condition.

On July 1, rioters stormed the Leg-Co Complex and caused mass destruction, forcing it to shut down two weeks before summer recess. Besides a repair cost of HK$40 million ($5.1 million), it also led to the delays in numerous livelihood-related bills and funding requests.

Over the past months, the emblem of the SAR and the national emblem have been defaced, with national flags trampled, burned and thrown into the sea.

There has also been a far-reaching effect on people's lives. Traffic has ground to a halt, with the special administrative region's airport forced to shut down operations and the subway system paralyzed. By the end of November, at least 147 of the 161 subway stations had been damaged.

The havoc also extended to campuses. In November, radical protesters had turned the Chinese University of Hong Kong and the Hong Kong Polytechnic University into their strongholds and had pitched battles with the police near campus entrances.

There was also extensive damage to the city's public facilities. Nearly 21,000 square meters of paving blocks from footpaths have been ripped up and used as weapons to attack police.

The SAR's government predicted that Hong Kong's economy would contract by 1.3 percent in 2019, marking the first year of recession since the global financial crisis 10 years ago.

Latest data showed Hong Kong's unemployment rate had risen to 3.2 percent by the end of November, the highest level since 2017.

The city is facing a possible exodus of talent, further straining relationship with the Chinese mainland and a tarnished international reputation of its business environment.

Ending violence and restoring order has been recognized as a priority for Hong Kong to have a new start.

In an online video published on the last day of 2019, Lam said the social unrest has generated sadness, anxiety, disappointment and even rage in the city. Pledging to faithfully perform her responsibilities in the coming year, Lam said the government will keep safeguarding the rule of law and actively seek solutions to the crisis.

Tony Kwok, former deputy commissioner of the Independent Commission Against Corruption, the city's anti-corruption watchdog, said that the social unrest is a thinly disguised "color revolution" with the ultimate goal of overthrowing the SAR government.

The only way to resolve the current crisis is to intensify law enforcement to deter rioters, Kowk said.

Ho Lok-sang, senior researcher at an economic policy research institute at Lingnan University, expressed hope that Hong Kong would return to the civilized society in the new year. Noting that it would need the efforts of all Hong Kong people, Ho urged local people to help restore calm and respect the facts.