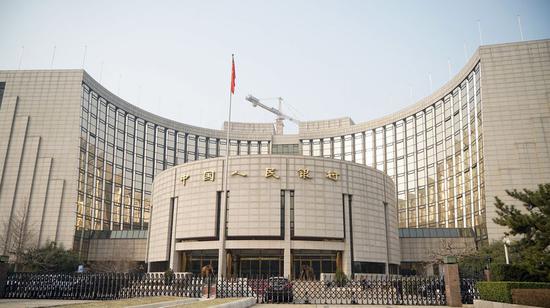 Photo taken on March 13, 2018 shows the headquarters of the People's Bank of China in Beijing, capital of China. (Xinhua/Cai Yang)

In its latest move to cut the reserve requirements, China's central bank has stepped up efforts to spur the real economy and lower social financing costs.

The People's Bank of China (PBOC) announced on Wednesday to cut the reserve requirement ratio (RRR) for financial institutions or the level of cash that lenders must hold as reserves by 50 basis points starting from Jan. 6.

The move was expected to offset the liquidity shortage ahead of the Spring Festival, or Chinese Lunar New Year, to keep overall liquidity in the banking system basically stable, an official from the PBOC said.

Referring to the reduction as part of the country's counter-cyclical adjustments, the official stressed that the stance of prudent monetary policy has remained intact and excluded the possibility of "flood-style" stimulus.

The announcement, "not a big surprise to many on the market," was meant to ease the liquidity strains resulted from the maturing reverse repos and targeted medium-term lending facility in January, as well as higher cash demand ahead of the holiday, Swiss banking giant UBS said in a research note.

It was also conducive to the scheduled issuance of special local government bonds in January and February, said the UBS.

According to the PBOC, the blanket RRR cut will release about 800 billion yuan (around 114.6 billion U.S. dollars) of long-term funds, injecting liquidity and lowering financing costs for the real economy.

With more than 120 billion yuan in long-term funds to be unlocked for small and medium-sized lenders, the central bank has urged financial institutions to increase support for small, micro and private businesses.

Last week, Chinese Premier Li Keqiang promised to grant stronger support to small and medium-sized banks delivering direct services to small and micro-enterprises during an inspection tour in Chengdu, capital city of the southwestern province of Sichuan, saying that research into the use of multiple tools including the RRR will be carried out.

The cut also echoed the central bank's pledge made Wednesday morning during a meeting where it vowed to advance financial supply-side structural reform for high-quality development and guide financial institutions to step up loans to the real economy.

While acknowledging the positive effects of the cut on market sentiment, Asian financial service group Nomura expected more liquidity to be unleashed in the future as the move might not be sufficient to fill in the liquidity shortage in January.

UBS also anticipated another RRR cut over the rest of 2020 as part of the country's efforts to boost credit growth but denied the possibility of a big stimulus.

The country's GDP expanded 6.2 percent year on year in the first three quarters of 2019 despite domestic headwinds and external uncertainties.