President Xi Jinping has encouraged China's audit offices to assume their duties across the board, carry out audits in accordance with the law and refine their institutions and mechanisms.

Xi made the remark in an instruction to outstanding auditing units and workers commended recently by three Party and State departments.

Xi is head of the central auditing committee, an organ formed in the institutional reform of Party and State bodies in March 2018.

Audit offices, under the unified leadership of the CPC Central Committee, must adapt to new demands in the new era and focus closely on the overall work of the Party and the State in comprehensively assuming their duties, Xi said in the instruction.

He urged them to make greater contributions to the modernization of China's governance system and its capacity for governance.

He also commended audit offices for fully implementing the decisions and plans of the CPC Central Committee, carrying out their duties in line with the law and conducting their work in a concrete and diligent manner.

They have played important roles in ensuring that the decisions made by the CPC can be thoroughly carried out, helping to win the three critical battles against potential risks, poverty and pollution, and safeguarding the order of financial and economic affairs, he said. He also praised them for helping to safeguard and improve people's livelihoods and promote clean governance.

The model workers and units were commended recently by the office of the central auditing committee, the Ministry of Human Resources and Social Security and the National Audit Office.

Premier Li Keqiang and Zhao Leji, secretary of the Central Commission for Discipline Inspection, the country's top anti-graft watchdog, met with representatives of the units and workers in Beijing on Thursday.

Li and Zhao are both deputy directors of the central auditing committee. 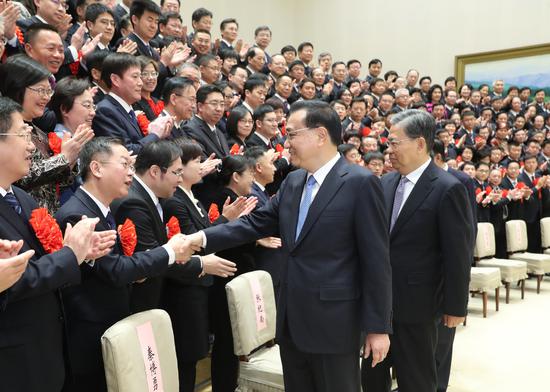 Chinese Premier Li Keqiang and Secretary of the Communist Party of China (CPC) Central Commission for Discipline Inspection Zhao Leji, both members of the Standing Committee of the Political Bureau of the CPC Central Committee and vice heads of the central auditing committee, meet with representatives of outstanding units and individuals of the country's auditing organs in Beijing, capital of China, Jan. 2, 2020. (Xinhua/Yao Dawei)