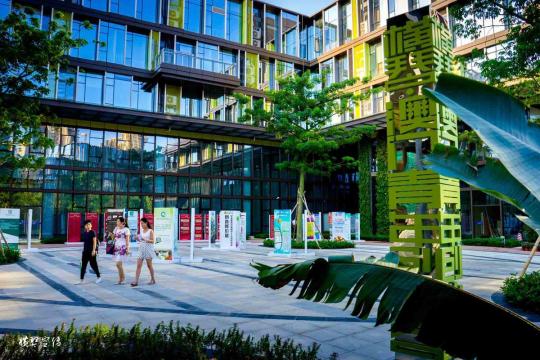 The Hengqin-Macao Youth Entrepreneurship Valley in Zhuhai is a national business incubator with 219 projects initiated by Macao companies. (CHINA DAILY)

Founded in 2009 by Kouk Tou Ho from Macao, Pachira Information Technology is a pioneer in speech recognition, natural language processing and voiceprint recognition, and is a service provider for many Fortune Global 500 companies.

The company said it will continue investing in AI, big data, autonomous driving and smart city construction to support the development of Zhuhai's smart sector in the upcoming years.

Ho and his team first arrived in coastal Zhuhai in 2018. Their AI project, focused on the development of core components on smart vehicles, won first prize at the inaugural China (Hengqin) Scientific and Technological Entrepreneurship Competition. Since then, Ho has established close business ties with Zhuhai.

"We gained strong support from the Macao, Zhuhai and Hengqin governments in terms of registration, policy consulting, business negotiation and relevant business arrangements. They bolstered us in business expansion, promotion, strategic partnership, and fund raising and investment," Ho said. "All those strengthened our resolve to settle."

Separated from Macao by just a narrow stretch of water, Hengqin has become a gathering hub for young people from Macao, who are keen on seizing opportunities in the Bay Area.

At a news conference on Monday on Hengqin's development in the past decade, Yang Chuan, head of the administrative committee of the Hengqin New Area, said that 2,157 businesses from Macao have settled in Hengqin with their investments totaling $18.83 billion.

As of Monday, there were 745 newly registered businesses run by people from Macao in the Hengqin New Area this year, signaling a rapid inflow of investment from the special administrative region.

Zhuhai, one of the first special economic zones in China and the only city on the Chinese mainland with bridge links to both Hong Kong and Macao, has long helped Macao moderately diversify its industrial development and has become a preferred destination for Macao businesses.

There are 4,111 businesses funded by Macao investors in Zhuhai, with total investment worth $28 billion, and a total of 943 businesses from Zhuhai engaged in multiple industries in Macao.

Zhuhai and Macao signed another batch of agreements for 20 cooperative projects worth more than 19.8 billion yuan ($2.81 billion) on Oct 21 at the Macao-Zhuhai Entrepreneur Summit 2019. They cover areas such as creative-cultural tourism, finance, cross-border commerce and trade, and healthcare.

A demonstration zone focused on promoting financial cooperation between Guangdong province and Macao was unveiled at the event.

"The Zhuhai special economic zone was founded to support Macao's development, and the Hengqin New Area is thriving during the expanding partnership between Zhuhai and Macao," noted Guo Yonghang, Party secretary of Zhuhai, during a press event on Dec 10 in the celebration of the 20th anniversary of Macao's return to the Chinese motherland.

"Macao's matter is Zhuhai's matter," he said. "Zhuhai regards it as the No 1 project to help Macao moderately diversify its industrial development in the city's involvement in the Bay Area."

Looking ahead, some demonstration projects between Zhuhai and Macao that cover technological innovation, finance, healthcare, cross-border trade, culture, tourism and exhibition as well as other professional services will be carried out to jointly build up a globally competitive modern industrial system for both Macao and Zhuhai, the official said.

Zhuhai will work on its urban planning in such a way as to leave sufficient space for the diversified development of Macao, be it urban development or industrial development.

In 2019, Zhuhai implemented a series of measures including removal of some limitations on legal services, cross-border finance, practice of doctors from Macao and access for Macao people to the mainland's pension system, and enrollment of Macao and Hong Kong kids at schools on the Chinese mainland.

New rules for the qualification of professionals in Macao construction companies were also released this year.

"Zhuhai has a strong industrial foundation, preferential government policies and enough physical development space, while Macao has capital resources, innovation results and global platforms. The two can be complementary to each other," said Wang Fuqiang, director of the department of industrial planning at the China Center for International Economic Exchanges.

Wang added that Macao has the potential to establish partnerships with Portuguese-speaking and Spanish-speaking countries and regions. The two can explore international markets together and attract more technologies to Zhuhai to build an innovation hub in the Bay Area.