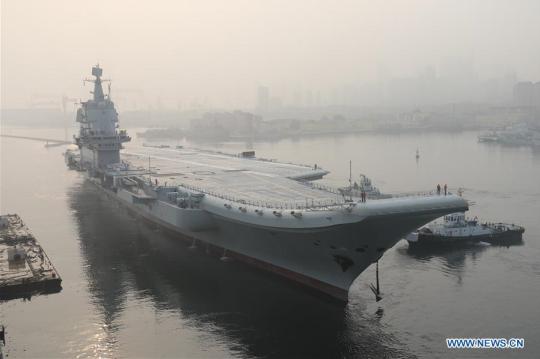 CNS Shandong, the People's Liberation Army Navy's new aircraft carrier, has better combat and logistic capabilities than its predecessor, CNS Liaoning, according to a Navy spokesman.

Senior Captain Cheng Dewei was quoted in a Navy statement as saying on Wednesday that the Shandong was wholly designed and built by Chinese researchers and engineers, and the program enabled them to gain knowledge and expertise in the carrier's overall design, construction and propulsion.

As for the ship's name, Cheng said that under naval vessels' naming rules, cruisers, amphibious assault ships and larger vessels are named after Chinese provinces or municipalities. He said the name was decided upon in accordance with the rules and was based on consideration of various factors including applications made by provinces and municipalities.

He also said that Sanya, Hainan province, was chosen as the site for the Shandong's commissioning ceremony after the Navy considered several aspects in the new carrier's program schedule. He did not elaborate.

The PLA Navy commissioned CNS Shandong — its second aircraft carrier and the first such ship wholly designed and built domestically — on Tuesday at a naval base in Sanya.

President Xi Jinping, also general secretary of the Communist Party of China Central Committee and chairman of the Central Military Commission, took part in the ceremony for the Type 002 class vessel.

Before Tuesday, the Navy had a sole carrier — the Liaoning, a Soviet-era vessel extensively refitted at a Dalian shipyard in Liaoning province. The Liaoning entered service in September 2012 and has executed several long-range operations.

The Shandong is the largest and most sophisticated naval ship ever developed and built in China.