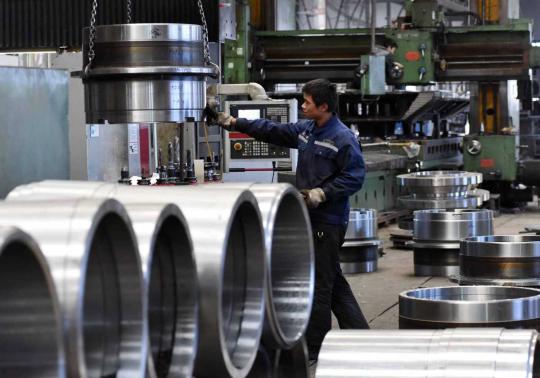 More enterprises feel their financial burden has been reduced this year as the country continues efforts to cut the operating costs of companies and create a good business environment, a new report said on Tuesday.

About 26 percent of more than 6,100 surveyed companies said they feel less of a financial burden this year, compared with a figure of just 14 percent feeling that way last year, the report released by the China Centre for Promotion of SME Development said.

At the same time, 45 percent of the surveyed companies said they have a relatively heavy financial burden this year, but this is down from 57 percent last year, the report showed.

Luo Junzhang, deputy head of the China Centre for Promotion of SME Development, said the nation's unprecedented tax and fee cuts have reduced the burden on companies and boosted their profits.

About 70 percent of surveyed companies said the amount of value-added taxes has dropped significantly, the report said.

At the same time, 90 percent of surveyed companies said they are satisfied with the business environment. Specifically, they are very satisfied with streamlined registration procedures for companies, easy access to affordable electricity, and better protection of intellectual property rights.

The results came after China put in place plans to reduce the tax burden and social insurance contributions of enterprises by nearly 2 trillion yuan ($285.8 billion) this year.

In the first three quarters of 2019, the country has already cut taxes and lowered the costs by 1.78 trillion yuan in total for enterprises, data from the Ministry of Finance showed.

But in the face of economic downside risks and external uncertainties, more efforts are needed to create a pro-business environment and implement all of the tax reduction plans, officials said.

There are also structural differences among the different regions in China.

For instance, the western region boasts low-price electricity supplies. But it is difficult for local enterprises there to access financing and they have to contend with higher financing costs, the report added.

In comparison, companies in eastern China have easier access to financing, but the tax burden and electricity bill are far heavier than their western counterparts, the report explained.

Among the 6,100 surveyed enterprises, some 70 percent are private companies, about 20 percent are State-owned firms, and 2 percent are foreign-owned.

Xin Guobin, vice-minister of the Ministry of Industry and Information Technology, the country's top industry regulator, said as the downward pressure on the economy growth continues, enterprises will face more challenges and they will have a stronger desire for lower operating costs and a better business environment. There is still a long way to go to reduce the financial burden on the country's enterprises.