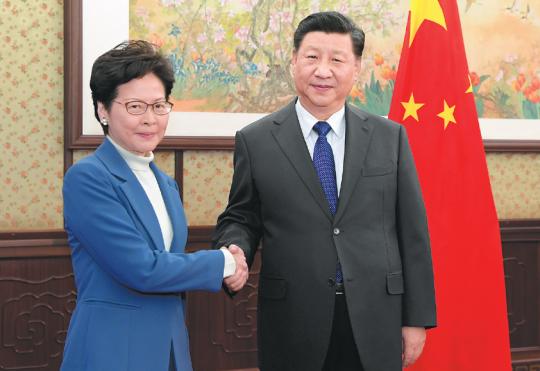 President Xi Jinping's firm support of Hong Kong Chief Executive Carrie Lam Cheng Yuet-ngor and the SAR government, which Xi expressed in his meeting with Lam in Beijing, conveys an "encouraging message" to the people of Hong Kong as they unite to battle violence in the city, political experts said on Tuesday.

The comments came after the president on Monday praised Lam's courage and commitment and voiced the central government's full support of the city's efforts to curb the violence, restore social order and stand firm on the principle of "one country, two systems".

The HKSAR government said on Tuesday that it got a leg up from Xi's approval, adding that it will join hands with society and step up efforts to tackle the monthslong social unrest and help the city move on.

Tam Yiu-chung, a Hong Kong deputy to the Standing Committee of the National People's Congress, said Xi's approval of Lam and the HKSAR enhances the confidence of Hong Kong society as a whole in fighting against violence and bringing the city back to peace and order.

He said Xi also made clear Beijing's unswerving determination to protect national sovereignty, security and development interests, and also to preserve the "one country, two systems" principle, which Xi also spelled out during the BRICS Summit in Brazil last month.

The city has been in turmoil since June, with more than 6,000 people arrested during the nearly 1,000 anti-government protests triggered by a now-withdrawn extradition bill.

Ip Kwok-him, a non-official member of the Executive Council－the chief executive's policy advisory body－and Hong Kong deputy to the National People's Congress, said the central government is also sending a warning to foreign forces and Hong Kong rioters to stop making trouble, while shrugging off rumors hinting that Beijing was not satisfied with Lam.

"Beijing will not give in to challenges to its national sovereignty and security by any forces who want to disturb Hong Kong's social stability and development," Ip said, adding that Xi's comment also is a call for society to unite to fight against the violence and get the city back on track.

Echoing Ip's comments was Frankie Ngan Man-yu, president of the youth wing of the Democratic Alliance for the Betterment and Progress of Hong Kong, who said restoring social order in the city is not just a must-do job for the HKSAR government, but also an urgent task for every resident and organization in the city.

The central government has sounded a clarion call for the city's patriotic forces and citizens to stand united to safeguard the "one country, two systems" principle, Ip said.

Earlier Monday, Premier Li Keqiang also met Lam, saying the central government "fully acknowledges" the efforts made by the HKSAR. But Li also noted the harm the six months of unrest have done to the city's social and economic development and urged continuous efforts by the SAR government to end the chaos and restore social order. During the meeting, Lam asked the central government to lend a helping hand to Hong Kong's development in the Guangdong-Hong Kong-Macao Greater Bay Area and the Belt and Road Initiative.

Ronny Tong Ka-wah, a member of the Executive Council, said the SAR government should continue to explore feasible measures on its own to quell the violence and bring the city back on track, and the central government can only provide directional guidance to the HKSAR government.

Li's remarks show the central government is genuinely concerned about the current situation in Hong Kong and clearly understands what is happening in the city, Tong said.

The central government's acknowledgment of the SAR government's efforts and firm support of the city's police force will help Hong Kong bring the violence and chaos to an end and restore order, he added.