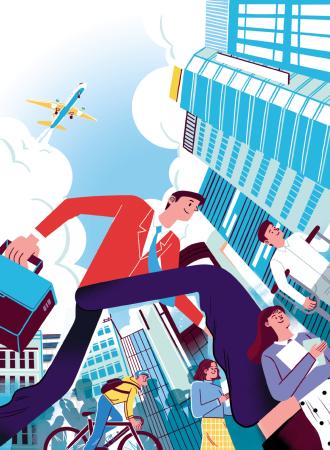 The State Council reiterated pledges to shore up the job market as it rolled out measures to cancel unreasonable restrictions on nonstandard employment, and bolster financial aid to struggling companies that keep staff on.

At its executive meeting on Wednesday, the Cabinet said China faced mounting pressure to stabilize the job market, as internal and external risks and challenges rose.

The employment-first policy must be carried out on a larger scale, and more jobs created by boosting domestic demand and stabilizing foreign trade, it said in a statement.

China added 11.93 million urban jobs in the first 10 months of this year. The jobless rate in urban areas was 5.1 percent in October, down 0.1 percentage points from the previous month, the National Bureau of Statistics said last month. In November, the country's official manufacturing purchasing managers' index rose to 50.2 percent, while the PMI for the nonmanufacturing sector increased to a seven-month high of 54.4. A PMI reading above 50 indicates expansion.

Premier Li Keqiang said at the meeting that a stable job market is a key indicator of the economy performing within a reasonable range, and it is important to steady the current jobs position while making efforts to create new ones.

He warned of greater risks and challenges potentially faced by the country next year. "The Chinese economy is on a curve of continuous expansion, and new jobs will be created in this process. It is not enough to stabilize the job market solely with jobs that are already in place," he said.

The meeting rolled out more incentives for business startups, including lowering the threshold for guaranteed loans to micro and small startups and the government offering more jobs serving the public good.

The government will launch pilot programs for individuals suffering from occupational injuries while working in jobs created by new business models.

Wang Ting, a human resources management and employment professor at the China University of Political Science and Law, said a number of factors had increased pressure on the job market. These included ongoing trade frictions between China and the United States, sluggish global economic growth, mounting downward pressure on the Chinese economy, and the rise of automation in the manufacturing sector.

Meanwhile, the rise of new business models, such as the sharing economy and the online platform economy, had spawned a large number of nonstandard jobs, which had become important for the labor market.

Wang cited the example of ride-hailing service drivers and express delivery workers, many of whom worked unconventional hours. They generally had no social security benefits as they often do not meet thresholds on contributions or benefits, he said.

Wang said it was important for authorities to come up with measures to protect their legitimate rights.

Zhang Chenggang, a job market researcher at the Capital University of Economics and Business, said even though the manufacturing and services sectors had shown signs of recovery according to the November surveys, authorities cannot afford to be complacent about job creation due to domestic and foreign uncertainties.

"We are still seeing problems such as strict standards and high thresholds in market access and qualification accreditation for nonstandard employment. The government support and services system has yet to cover those new forms of employment," he said.

The Cabinet meeting pledged to step up support for businesses to keep their payrolls stable. It also extended for another year policies of lower premiums for unemployment insurance and workplace injury compensation insurance, partial reimbursement of unemployment insurance contributions and subsidies for in-job vocational training.

Authorities will offer subsidies for jobless middle-school graduates under 20 if they take part in skills training.