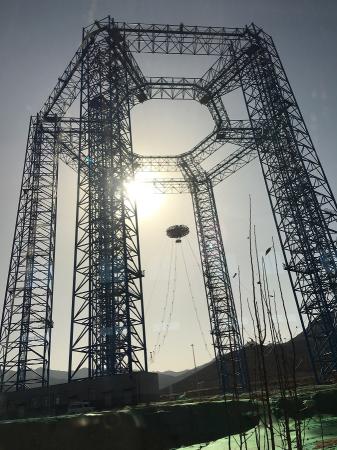 China carries out a key experiment for its coming Mars mission in Hebei province's Huailai on Nov. 14, 2019. (Photo by Zhao Lei/chinadaily.com.cn)

China carried out a key experiment for its coming Mars mission in Huailai, Hebei province, on Thursday in front of dozens of foreign diplomats and journalists.

The experiment aimed to verify the design and capability of the lander of China's robotic Mars probe, the first of its kind in China, according to Zhang Kejian, director of the China National Space Administration, who oversaw the test.

It also was the first time China had opened its Mars mission, which is expected to be launched into space next year, to foreign visitors, he said, adding that it was a practical step in the nation's exchange and cooperation with the international space community.

A test version of the Mars probe lander, which was tied to a 140-meter metal tower, conducted hovering, descent and obstacle-evading operations in a simulated Martian gravitational environment at Asia's largest testing site for landing on extraterrestrial bodies.

Present during the experiment were ambassadors and other diplomats from 19 nations including France, Italy and Brazil, representatives from the delegations of the European Union and African Union to China and the Asia-Pacific Space Cooperation Organization, as well as domestic and foreign reporters.

"Through this event, you will be able to better understand our Mars mission and other deep-space exploration programs, and we can discuss the feasibility of further cooperation," Zhang said.

"We welcome space authorities, research organizations and enthusiasts from around the world that wish to take part in our space endeavors."

Zhang Rongqiao, chief designer of China's first Mars mission, said before the experiment that the landing process is one of the most difficult and challenging parts in a Mars mission. Engineers built the facility to simulate the red planet's gravitational conditions and the Martian surface, he said.

He said the mission will be launched in 2020 and will land an unmanned probe on the Martian surface before July 2021.

Mission planners expect that it will take about seven months for the mission to reach the Martian atmosphere.

Compared with foreign predecessors, the Chinese mission will produce better performance in terms of technological level and engineering capability, and will fulfill three scientific objectives — orbiting the planet for comprehensive observation, landing on the surface and sending a rover to roam around landing site, Ye said.

According to the China National Space Administration, the country's first Martian probe will conduct scientific investigations on Martian soil, geological structure, environment, atmosphere as well as searching for signs of water.

Sun Zezhou, the spacecraft's chief designer at the China Academy of Space Technology, said the robotic probe will consist of three parts — the orbiter, the lander and the rover.

The rover will have six wheels and four solar panels and will carry 13 scientific instruments. It will weigh more than 200 kilograms and is designed to function for about three months on the planet, he said.

In the second step of China's Mars exploration program, a larger probe will set off for Mars around 2030 to take samples and then return to the Earth, space officials have said.

China also has a long-term goal of sending humans to Mars, according to the country's manned-space authorities.