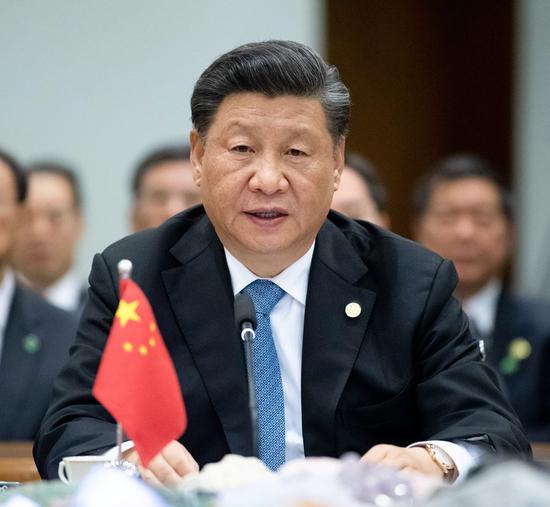 Chinese President Xi Jinping delivers a speech entitled "Together for a New Chapter in BRICS Cooperation" at the 11th summit of BRICS in Brasilia, Brazil, Nov. 14, 2019. (Xinhua/Li Xueren)

Chinese President Xi Jinping on Thursday called on the BRICS Business Council and the New Development Bank to make greater contributions to the economic and social development of the BRICS countries as well as the emerging-market economies and developing world in general.

Xi made the remarks during the BRICS leaders' dialogue with the two institutions at the 11th BRICS summit held in Brasilia, capital of Brazil.

The leaders heard the work reports of the two institutions, received the annual work report of the BRICS Business Council and made remarks respectively.

Xi spoke highly of the work of the two institutions and expressed the hope for them to promote the enterprising spirit and strive for more achievements.

Xi urged them to deepen cooperation in fields such as innovation and the digital economy and create more quality projects, and to help the countries improve their business environment by continuing to advise their various government departments.

He underscored the importance to balance economic profits with social responsibilities and pay attention to the people's well-being.

Cooperation should be strengthened in building high-quality, sustainable, inclusive and accessible infrastructure, Xi said, adding that green technologies should also be explored and promoted.

He also urged the New Development Bank to prepare for membership expansion.

In their respective remarks, leaders of other BRICS countries all affirmed the work of the two institutions and urged them to strengthen the capabilities of the BRICS countries as well as the emerging markets and developing countries at large to finance infrastructure and sustainable development projects.