Cool the craze for glass bridges 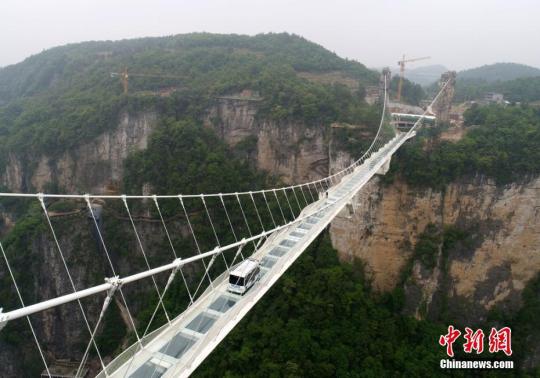 An unmanned bus, weighing 5.5 tons, test runs on a 430-meter-long and 6-meter-wide glass bridge hanging between two steep cliffs 300 meters above the ground in Zhangjiajie, a famous tourist destination in Central China's Hunan province, on April 24, 2019. The test run shows the first unmanned bus route in a scenic area across the country can soon be in operation. (Photo/China News Service)

Since the "glass bridgeE" across a valley in Zhangjiajie, a sight-seeing spot in Hunan province, became a tourist attraction three years ago, dozens of such "bridges for the brave", which are built with plate glass and steal beams, have been constructed across the country.

To attract tourists and boost tourism revenue is the only impetus prompting the managers of the sightseeing zones to construct such bridges.

The public have enough reasons to question whether such purely interest-oriented engineering projects in such dangerous places are results of basic planning laws being compromised, as several such bridges have reportedly showed worrisome signs indicating they cannot bear the heavy load of the crowds of tourists, which should ring alarms.

The rocks on the cliffs are sometimes not fit to serve as the foundation for such bridges. Let alone the toll the wind and weather will take on the structures.

Also the environmental influence is another factor that has obviously been ignored. Unlike the stone and wooden bridges that local people have built in mountains, where the construction materials are invariably natural and come from the mountains, the construction of such adventurous bridges means large amounts of modern construction materials are transported and imbedded in the mountains, many of which will be very difficult to remove once they are built there, rendering them permanent industrial waste in natural beauty spots.

Only the tourism authorities in Beijing and Anhui province have made their approval process for such projects more strict after realizing their potential risks and environmental implications. It is time that the other local tourism and construction administrative departments had second thoughts before approving such projects.