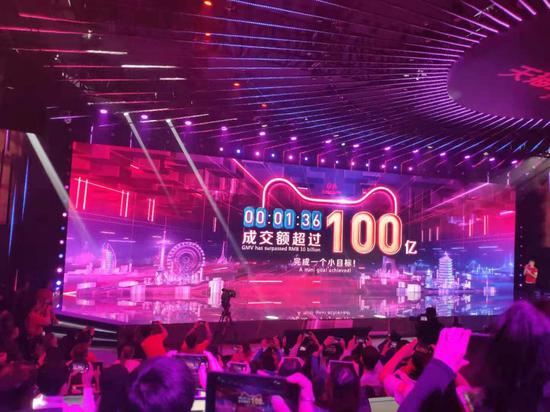 At one hour, 26 minutes and seven seconds after midnight, sales on TMall hit 120.7 billion yuan, surpassing the whole first day of sales on Singles' Day in 2016.

Both figures set a new record for the Single's Day shopping festival on TMall, which was first designed by Tmall on Nov. 11, 2009, and has become one of the largest online shopping sprees worldwide.

At the peak, 544,000 orders were created in a second on TMall, setting a new record for peak online traffic in the world, according to Alibaba.

Alibaba Cloud, the cloud service provider under Alibaba Group, has launched a self-developed liquid-cooling technology for the processors in its data center ahead of the shopping spree on Monday.

The new tech involves a special liquid coolant function that is similar to soaking Alibaba's numerous processors in cool water. It is part of Alibaba's efforts to promote a more environmentally friendly annual online sales promotion, according to the company.

More than 22,000 overseas brands from 200 countries and regions have participated in this year's shopping spree in China, according to Alibaba.