No meddling in HK, envoy to UK warns 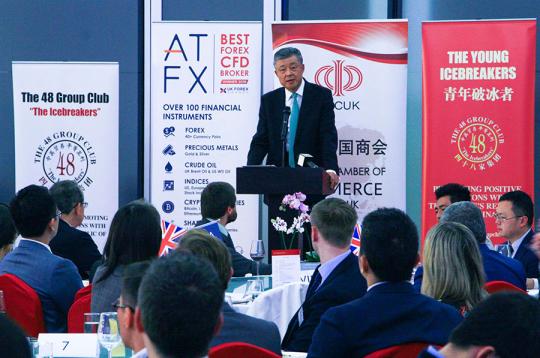 Chinese Ambassador to the United Kingdom Liu Xiaoming has warned over the Hong Kong question's impact on ties between Beijing and London, and urged British politicians not to confuse the 1984 Sino-British Joint Declaration - which outlined the future of Hong Kong after its return to the motherland in 1997 - with "one country, two systems".

While delivering his keynote speech at Young Icebreakers 11th Anniversary Dinner, a gathering of young business elites, in London on Friday, Liu elaborated on why fully and faithfully implementing "one country, two systems" was key to sustained prosperity and stability in Hong Kong.

He said that some politicians in the UK have taken advantage of difference of views concerning Hong Kong's ordinance amendments to accuse China of "going against the 'one country, two systems' principle".

"They also support activists who are anti-China, aimed at destabilizing Hong Kong in order to increase pressure on the government of Hong Kong Special Administrative Region," he said.

The diplomat said the fourth plenary session of the 19th Central Committee of the Communist Party of China, which concluded last week, reiterated that China will never tolerate any act that challenges the bottom line of "one country, two systems", or attempts to split the country.

The opposition and radical forces in Hong Kong have taken advantage of difference of views on amendments to stir up trouble, instigate confrontations, and advocate "Hong Kong independence", he said.

"Their real intention is to destabilize Hong Kong and paralyze the SAR government, so that they can seize administrative power and separate Hong Kong from the motherland. It is they who are undermining 'one country, two systems'," Liu said.

Some politicians in Western countries have also coordinated, guided and funded violent acts in Hong Kong behind the scenes, he said.

In response to questions about whether "one country, two systems" had anything to do with the Sino-British Joint Declaration, Liu said it was late Chinese leader Deng Xiaoping who proposed this great concept and the "copyright" of this principle belongs to China.

Citing the joint declaration as a justification for irresponsible remarks and interference in Hong Kong affairs has no valid ground, the ambassador said.

He said that "one country, two systems" did not originate from the joint declaration.

When China pledged that 'one country, two systems' would remain unchanged for 50 years, they did it in accordance with the Basic Law (of the Hong Kong SAR), rather than the joint declaration, Liu said.

There are 300,000 British citizens and more than 700 British companies in Hong Kong. The connections and exchanges between the UK and Hong Kong are extensive and close, he said.

Liu called on the young audience to help the public in the UK to understand "one country, two systems" correctly.

A stable and prosperous Hong Kong is in the interests of both China and the UK, he said.