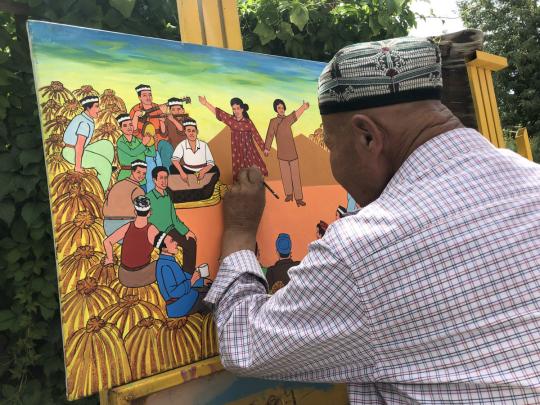 U.S. Secretary of State Mike Pompeo's claims about family members of so-called Uygur activists in the Xinjiang Uygur autonomous region being "harassed", "imprisoned" or "detained" in the region are groundless, the regional government said in a statement released on Saturday.

On Tuesday, Pompeo said the United States was deeply troubled about reports of family members of Uygur activists, including Furkhat Jawdat and Alapat Arkin, being unfairly treated or harassed by the Chinese government.

Both Furkhat and Alapat were members of the World Uygur Congress, a terrorist and separatist organization, the statement said.

It also called on Pompeo to stop supporting the East Turkestan Islamic Movement terrorist and separatist group, which had plotted a number of terrorist attacks in Xinjiang and aimed to separate the region from China.

Although the World Uygur Congress disguised itself as a nonviolent organization, its real intention was also regional independence from China, said Ma Pinyan, a researcher at the Xinjiang Academy of Social Sciences, who described it as one of the East Turkestan forces.

After meeting with Pompeo on March 26, Furkhat claimed his mother was moved to a prison from a vocational education and training center, which was set up to help those influenced by religious extremism and terrorism and involved in minor criminal activities. In truth, Furkhat's mother was living a normal life at her home and was in contact with him from time to time, the statement said.

In addition, Alapat's mother, younger brother and younger sister were also living a normal life. His mother was not put into a "concentration camp" at the end of 2017, as he had claimed. She was never detained, the statement said.

Pompeo also brought up the case of Zumrat Dawut, who he previously said was sent to a vocational education and training center by force. In October, her brother, Abduhelil Dawut, said in a video that she was never sent to any center.

On Tuesday, Pompeo alleged their elderly father had been interrogated and detained multiple times by Chinese authorities in Xinjiang and that he recently died under unknown circumstances. He had actually been living with his children, the statement said, and he had never been either "interrogated" or "detained". He died of heart disease at the age of 80 in a hospital last month, it said.

In response to Pompeo's critical comments about China's treatment of members of the Uygur ethnic group, Foreign Ministry spokesman Geng Shuang said on Wednesday that under the pretext of human rights, the U.S. had once again smeared China's Xinjiang policy and made comments using distorted facts.

Ma said: "It's not the first time that Pompeo's comments on Xinjiang were proven inaccurate; he will carry on doing so because facts aren't what he looks for. People should be clear that attacking Xinjiang is a part of his political agenda. He will continue to spread rumors to smear Xinjiang to achieve political goals."