U.S. has more companies at this year's import expo 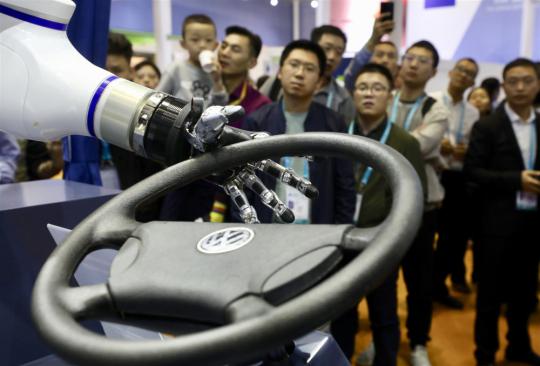 Companies from the United States are showing greater enthusiasm for the China International Import Expo this year, with the number of participants surging by 18 percent from the first expo in 2018.

Despite the China-US trade dispute, 192 US companies such as Qualcomm, Boeing and General Motors have 47,500 square meters in exhibition space at the second CIIE, according to the Ministry of Commerce.

That gives US companies, touting products and services such as manufacturing, telecommunications and agriculture, the expo's biggest enterprise exhibition area, according to the China International Import Expo Bureau, the event organizer. Some are on their maiden trip and others are second-time participants at the massive event, which began on Tuesday. Hopes are high to gain a greater share of the Chinese market or strike more deals than last year.

Cargill, the Minnesota-based agricultural giant, expects to sign agreements at the expo worth over $3.1 billion to sell beef, poultry, grains, vegetable oils and other products, the company said. It doubled its booth area to 200 square meters after a successful outing last year.

"Cargill is pleased to participate at the CIIE, which provides unique opportunities to strengthen economic cooperation and bolster mutually beneficial trade in the Chinese market," said David MacLennan, Cargill's chairman and CEO.

Honeywell International tripled its exhibition area this year and is touting over 30 technologies for use in areas like aircraft, construction and manufacturing. "The opening-up, cooperation and development at the CIIE encourages us a lot and for the future," said Henry Liu, general manager of Honeywell performance materials and technologies for Asia-Pacific.

Many of the products and technologies exhibited by Johnson &Johnson were making their debut in China or on the world stage, according to the company, which saw double-digit growth in China across all its units in 2018.

"The CIIE is an important initiative as the government takes concrete measures to open up the market and build an open, inclusive business environment," said Will Song, chairman of Johnson &Johnson China.

Qualcomm, the US telecommunications equipment manufacturer, has great confidence in the Chinese market and expects to further strengthen strategic cooperation with Chinese partners in the 5G age, said Frank Meng, chairman of Qualcomm China.

The greater presence of US businesses is strong evidence of their strong desire to tap into the Chinese market and expand cooperation, said Xue Rongjiu, deputy director of the China Society for WTO Studies.