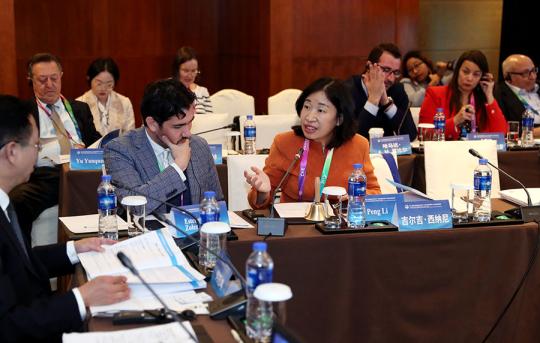 Attendees discuss topics at a seminar at the second Hongqiao International Economic Forum on China's 70-Year Development and the Building of a Community with a Shared Future for Mankind in Shanghai on Wednesday. (Photo by FENG YONGBIN/CHINA DAILY)

China has become and will continue to be a major driving force of inclusive global growth, with the Belt and Road Initiative to be a new platform of globalization with mutual benefits, said experts from home and abroad.

It took 70 years for China to grow from a closed and weak economy into the world's second-largest, mainly through promoting industrialization and urbanization, boosting technological innovation and reducing poverty, said a consensus paper released on Wednesday.

"China's development practice has proved that the vast number of developing countries can explore multiple paths of modernization in accordance with their own cultures, histories and conditions," the paper said, with more than 400 think tank analysts and media experts from over 100 countries and regions agreeing.

The paper was delivered by Guo Weimin, vice-minister of the State Council Information Office, during the second Hongqiao International Economic Forum on China's 70-Year Development and the Building of a Community with a Shared Future for Mankind, which ended on Wednesday.

China's development has also contributed to globalization and provided growth and employment opportunities for different countries, according to the paper.

Particularly, the BRI has promoted collaboration between countries with different cultures and institutions and has created a new platform for integrative development, Guo said, citing the paper.

"The idea raised by China of building a community with a shared future for mankind has made significant contributions to gathering all parties to combat global challenges hand in hand and pursuing sustainable development of mankind," Guo added.

Minhaj Uddin Mahmud, a senior research fellow at the Bangladesh Institute of Development Studies, said at the forum that China's development achievement offers lessons for developing countries, while the BRI can be interpreted as China's effort to bring its resources to the global community.

Bhokin Bhalakula, former deputy prime minister of Thailand and president of Thai-Chinese Culture and Economy Association, said, "It think it is wise of China to propose the BRI, which is expected to bring China's development to a better level, as well as (serve as) a gateway for a better future for mankind."

China's miracle of rapid growth and long-lasting stability has originated from its system of socialism with Chinese characteristics, Zhou Shuchun, China Daily's publisher and editor-in-chief, said at the forum.

"Therefore, China's contribution to the world lies not only in its more than 30 percent contribution to global growth, but also in its exploration and development of institutions and its civilization," Zhou said.

"China has become a crucial force of opening-up in global development," Zhou said, adding that the country has furthered opening-up in a broad-minded way when protectionism and unilateralism are on the rise around the world.

To better carry out its global responsibility, China should uphold building a community with a shared future as the new goal of reform and opening-up, said Chen Xulong, director of the China Institute of International Studies' department of international and strategic studies.