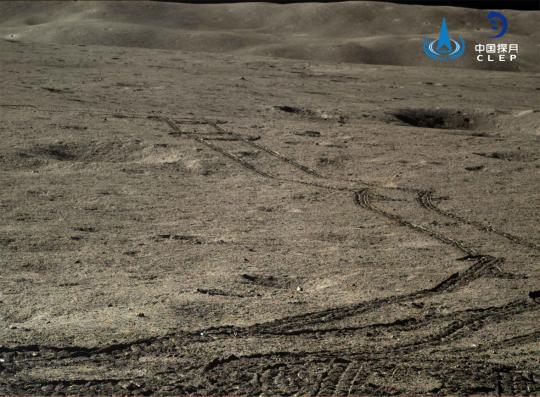 A photo taken by Yutu 2, China's lunar rover, of its tracks on the moon. The rover has moved 318 meters on the moon and is 218 m from the lander. [Photo by CHINA NATIONAL SPACE ADMINISTRATION]

China's Chang'e 4 robotic probe started its 11th period of dormancy on the moon on Monday morning after the Yutu 2 rover sent back pictures of its tracks around the landing site, according to the China National Space Administration.

The Chang'e 4's lander and Yutu 2 completed their tasks on their 11th lunar day and will endure temperatures as low as -190 C during the 14-day dormancy, the administration said in a statement.

A lunar day equals 14 days on Earth, and a lunar night is the same length. During lunar nights, the temperature falls below -180 C, and there is no sunlight to provide power to the probe.

All of the equipment mounted on the lander and rover are in good condition, the statement said, adding that Yutu 2 has moved 318 meters on the lunar surface and is 218 m from the lander.

Chang'e 4 was lifted atop a Long March 3B rocket in early December at the Xichang Satellite Launch Center in Sichuan province to embark on the country's fourth lunar exploration and the world's first expedition to the moon's far side, which never faces the Earth.

The probe made a soft landing on the far side on Jan 3 and then released the Yutu 2, the world's seventh rover on the moon, to roam and survey the landing site in the South Pole-Aitken basin, the largest and deepest known basin in the solar system.

The scientific tasks of the Chang'e 4 mission include low-frequency radio astronomical observation and surveying the terrain and landforms around the landing site. As no probe had landed on the far side before Chang'e 4, all scientific information obtained during the mission would be new to the world.