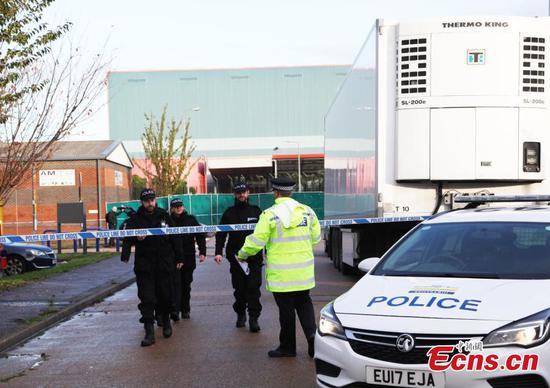 Police officers are seen at the scene where bodies were discovered in a lorry container, in Grays, Essex, Britain October 24, 2019. (Photo/China News Service)

British police said the death of 39 people, reportedly to be Chinese nationals, found in a truck in Essex, United Kingdom, has led to the largest murder investigation in the force's history.

The Chinese Embassy has sent a team led by the minister-counsellor in charge of consular affairs to Essex, England. They have met with the local police. The police said that they are verifying the identity of the deceased, whose nationality still cannot be confirmed.

A magistrate has granted Essex Police more time to question the truck's driver, a 25-year-old from Northern Ireland, who was arrested on suspicion of murder.

The bodies were discovered by ambulance staff at Waterglade Industrial Park in Grays, a town 40 kilometers east of London, and authorities were alerted before 1:40 am.

Essex Police believe the truck's cab entered the UK via Holyhead, Wales on Sunday. The cab and trailer containing the victims apparently took separate journeys before arriving at the industrial park. British authorities said they believe the container came from the port of Zeebrugge, Belgium, to Purfleet, England, where it arrived early on Wednesday.

In a statement, Essex Police said, "We have since confirmed that eight of the deceased are women and 31 are men and all are believed to be Chinese nationals." The incident, the statement went on to say, has"led to the largest murder investigation in our force's history".

The police said one victim previously thought to be a teenager was a young adult woman.

It is the worst such tragedy in the UK in almost 20 years, since the bodies of 58 Chinese were found in a container in Dover, Kent, in 2000.

Officers have searched three addresses in County Armagh, Northern Ireland in connection with the investigation.

Media reports suggested that if the refrigeration unit were on, the migrants could have frozen to death in temperatures as low as -25 C.

The truck has since been moved from the industrial park.

"Our recovery of the bodies is ongoing and the post-mortem and identification processes, which will be lengthy and complex, can then begin," said Essex Police's deputy chief constable, Pippa Mills.

"Our number one priority is preserving the dignity of the 39 people who have died and ensuring that we get answers for their loved ones."

The National Crime Agency said it was assisting in the investigation and working to "urgently identify and take action against any organized crime groups who have played a role in causing these deaths".

The Belgian federal prosecutor said in a statement on Thursday that it had opened an inquiry into the deaths of the 39 people.

"The investigation will focus on the organizers of and all other parties involved in this transport," the prosecutor said.

James Halden, acting leader for Thurrock Council, said the deaths of the 39 people were "devastating".

"Let us be clear, this is a terrible crime,"he said in a statement. "Thurrock Council will remain in constant contact with the police to support their investigation and keep the vital services in the area functioning. This will be a lengthy investigation and I can assure you that the council will work with all services to understand what can be done, if anything, to better work holistically in the future to prevent such events."

Maurice Wren, chief executive of the Refugee Council in London, said: "This is truly tragic news, but depressingly predictable and avoidable news. If you deny people safe and regular travel routes to find safety, you are leaving them with no choice but to risk their lives on utterly perilous journeys and in the hands of criminal gangs. These gangs are a symptom of a much deeper problem, namely governments' failure to provide safety to those who desperately need it."