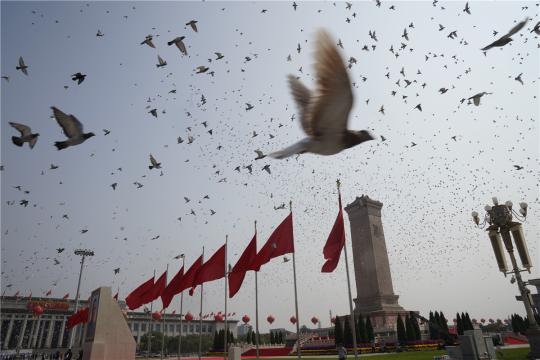 Seventy thousand pigeons are released in Tian'anmen Square on Oct 1 to mark the 70th anniversary of the founding of the People's Republic of China.（Photo/Xinhua）

When 70,000 pigeons were released in Tian'anmen Square on Oct 1, Huang Libing, 53, was eagerly waiting for those he owned to arrive back at his home in a hutong, or alleyway, about 5 kilometers away.

The birds had been set free to mark the 70th anniversary of the founding of the People's Republic of China.

All 30 of his pigeons returned home within 10 minutes, with the quickest completing the journey in only about five minutes.

"I watched the livestream broadcast of this year's National Day celebrations - it was a particularly magnificent sight, both the pigeons and the military parade," he said.

Huang has taken part in major celebrations for years, responding to calls by the Beijing Racing Pigeon Association, which handles the release of the birds for such occasions.

He received special leg bands for all his pigeons released on Oct 1 and a subsidy of 15 yuan ($2.10) for each one. Such bands, bearing identification information, are attached to pigeon chicks when they are about 7 days old.

"It (Oct 1) was a great honor. The selection process was strict and the pigeons had to undergo physical examinations. Some of my friends were sorry that their birds were not chosen and asked me for leg bands," he said.

The first time homing pigeons were released to mark National Day was in 1959 to celebrate the 10th anniversary of New China, when several thousand took to the sky.

The homing pigeon industry started to take off with the introduction of the reform and opening-up policy in 1978. Associations for pigeon owners were set up nationwide.

Since then, pigeons have been released regularly for major events, including the 2008 Beijing Olympics.

Founded in 1982, the Beijing Racing Pigeon Association prepares for such occasions several months in advance and encourages its members across the city to submit birds voluntarily.

Huang Jian, vice-president of the China Racing Pigeon Association, said: "Once released, these pigeons are anxious to fly home. On most occasions, they will reach home. If you do come across a pigeon that has lost its way, you can give it food and water, after which it will fly home on its own." Huang Jian sent 60 pigeons for this year's National Day celebrations.