Herders revel in tradition and tourism 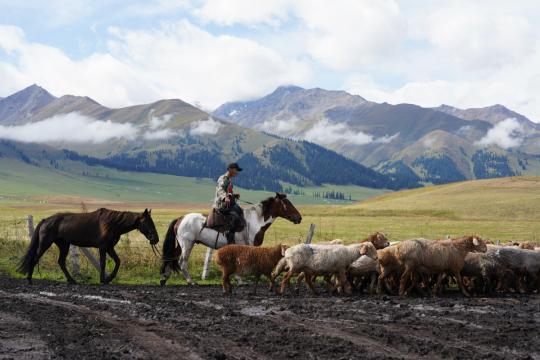 Editor's note: This is the eighth story in a series focusing on the Xinjiang Uygur autonomous region, looking at developments in the economy, the cultural and business sectors and poverty alleviation measures.

On Oct 8, Bahargul Asat packed up her yurts on the Narat, the fertile grassland of the Xinjiang Uygur autonomous region, and moved to her winter settlement as the vast expanse was transformed into an autumnal golden blanket at the foot of the snow-capped Tianshan Mountains.

Like her nomadic Kazak ancestors, Bahargul and her family spent the summer grazing more than 100 sheep and horses on the grassland that the ethic group has called home for thousands of years. However, unlike her forebears, as head of a yurt hotel that houses tourists on the grassland, she had an extra-busy summer.

Dubbed the "grassland in the sky" for its average altitude of 1,800 meters, the Narat, in Ili Kazak autonomous prefecture, is surrounded by mountains on three sides. To view the Narat, visitors have to climb a mountain before the vast grassland suddenly opens up at the end of the winding mountain roads.

Most of the people in Bestobe, Bahargul's home village, retain the nomadic lifestyle, and members of the Kazak ethnic group are among the last nomads in China.

As the grassland is located at high altitude, the herders have to move their livestock and their yurts to low-lying pastures when the weather turns cold, before returning to higher ground for spring and summer. Although there are no boundary markers, each family knows exactly which part of the grassland is theirs for raising livestock.

"It's how we Kazaks achieve harmony with the environment. Each pasture will have time to recover from grazing. Also, only strong, healthy animals can survive the tough migration, which can sometimes take a week. The system has made the Kazaks strong, and it still works," said Bahargul proudly.

Her family's winter pasture is only 50 kilometers from the Narat, and she will return to the grassland in June.

Xinjiang is possibly the only place in China where vehicles on the highway are required to give way to flocks of sheep escorted by traffic police and herdsmen on horseback during the migratory period. After all, many roads in the region were built on ancient livestock migration routes.

Attracted by the grand beauty of the grassland that was once a hidden jewel, a growing number of tourists have flocked to the Narat in recent years. The influx of visitors has changed the herders' lives.