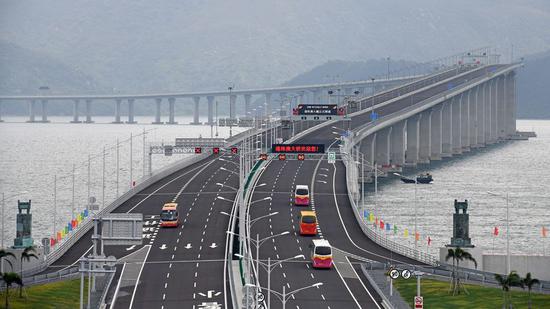 (ECNS) -- Authorities in south China’s Guangdong Province will add 5,500 more permits for private vehicles to across Hong Kong-Zhuhai-Macao Bridge (HZMB) as it marks one year of operation.

According to the Traffic Management Bureau at the Guangdong Public Security Department, it will issue 5,000 permits to private cars from Hong Kong and 500 for mainland vehicles to drive in both areas using the bridge.

Drivers can apply for the permit from Nov. 18 via http://gdga.gd.gov.cn/jgj/index.html. The result will be sent to applicants by text message. Drivers whose applications were not processed in 2017 and 2018 do not need to apply again unless their status has changed.

The 55-km bridge, known as the longest bridge-and-tunnel sea crossing in the world, is becoming an important link in the coordinated development of cities in the Guangdong-Hong Kong-Macao Greater Bay Area.

Since its opening, more than 14 million passengers and 1.5 million vehicles have used the bridge. Average daily traffic reached 80,000 passengers during the Chinese Spring Festival holiday, with a record high of 113,000 set on Feb. 7, Xinhua News Agency reported.