BeiDou-3 satellites might all launch into space by June 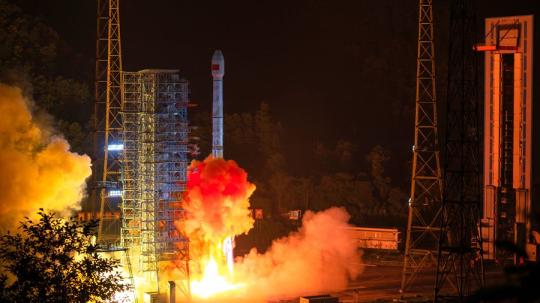 China will possibly launch all BeiDou-3 satellites to complete the global network of its BeiDou Navigation Satellite System into space by the end of June, about half a year ahead of schedule, according to a top system official.

Ran Chengqi, director of the China Satellite Navigation Office, said recently that he was very confident that all BeiDou-3 satellites will be launched into space by the end of June to complete the constellation system half a year earlier.

As the construction of the system will come to an end, the follow-up stable operation will rise to a height as important as the engineering construction, application promotion and international cooperation, Ran said.

The stable operation of the BDS will be the world's leading level, contributing a first-class satellite navigation system with global coverage and advanced performance to the world, he said.

China started to build the BDS-3 system in 2009, and planned to complete construction by the end of 2020, with intensive launch missions. A previous plan showed China would send 10 BDS satellites into space this year.

To meet the tight launch schedule, satellite developer China Academy of Space Technology said it streamlined the development process of BDS satellites, halving the development cycle of a single satellite model to 18 months.

The system has been applied in many industries, including transport, maritime affairs, electricity, civil affairs, meteorology, fisheries, surveying and mapping, mining and public security.