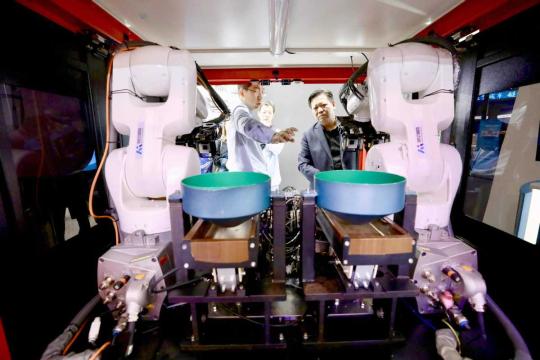 A smart industrial inspection and repair robot is displayed at the Light of Internet Expo in Wuzhen, Zhejiang province, on Monday. (Photo by Zhu Xingxin/China Daily)

More efforts are needed for China to drive new forms and applications of the industrial internet, so as to foster fresh growth engines for the country's manufacturing industry, top officials and industry leaders said on Monday.

Zhuang Rongwen, minister of the Cyberspace Administration of China, called for accelerated efforts to make more innovations in the industrial internet for higher-quality economic growth, at the sixth World Internet Conference in Wuzhen, Zhejiang province, which ends on Tuesday.

"To maintain the vigorous development of the industrial internet, we must promote deeper convergence of digital technologies to maximize the effect of digitalization," Zhuang said on Monday.

The industrial internet refers to a network of combined, advanced machines with internet-connected sensors and big data analytics and is widely considered an important way of improving industrial efficiency.

"China will put big efforts into developing new forms of industrial applications and software, and in making new breakthroughs in key technologies, including 5G, edge computing and artificial intelligence," said Chen Zhaoxiong, vice-minister of industry and information technology, at the conference.

"An increasing number of applications are being commercialized with each platform owning more than 1,900 apps on average, which have been applied in over 100 different industries," said Chen in Wuzhen.

Such a move is part of China's determined push to gain an edge in the industrial internet, which Qianzhan Industry Research Institute estimates will reach a market size of 10.8 trillion yuan ($1.53 trillion) by 2025, and also accelerate manufacturing upgrading.

During this process, a string of Chinese companies have beefed up their presence in the segment, where they have greatly improved efficacy and management by introducing leading technologies in their production process or assembly lines.

A shining example is Inspur Group Co Ltd, a major server maker and big data company. It launched its industrial internet platform in 2017 to expand its presence.

Sun Pishu, chairman of Inspur, said at the Wuzhen conference that the industrial internet is China's third critical network in internet development, following networks that work for consumers and government affairs.

"The sector will play a key role in promoting the nation from a big manufacturing country to a great manufacturing power," Sun said.

While the industrial internet is developing vigorously, experts said that a huge amount of data has been transferred between different chains, requiring products and minor components to be identified accurately.

To tap this demand, Humi Network Technology Co Ltd, a subsidiary of leading Chinese motorcycle manufacturer Zongshen Industrial Group, announced at the conference that it will cooperate with scientific institutes and major tech firms to accelerate breakthroughs in key technology.

"We aim to finish the establishment of such standards in the motorcycle industry by 2020 and expand to other major industries by 2025," said Feng Feng, senior vice-president of Humi.

The industrial network of Humi has now attracted 114,000 registered users including more than 91,000 industrial users. The total transaction volume has exceeded 900 million yuan so far, the company's latest data showed.

However, Zuo Yingnan, vice-president of Chinese cybersecurity company Qi An Xin Group, added that the development of the industrial internet also brings new challenges in ensuring the security of industrial computers and data.

"But it also brings new cybersecurity challenges, which mainly come from two aspects - how to better protect industrial computers and servers, and how to secure industrial data as they flow across different platforms," Zuo said, adding that more attention should be paid to tackling the bottleneck.