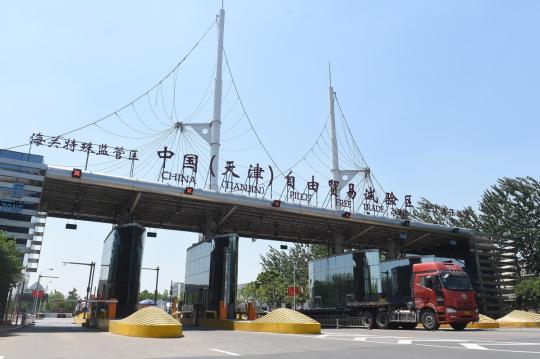 A truck passes through the gate of the Dongjiang bonded port area of Tianjin Pilot Free Trade Zone. [Photo provided to China Daily]

Two major free trade zones (FTZs) in Tianjin Binhai New Area are seeking vice-managers for their management committees from both home and abroad, promising an annual salary of no less than 500,000 yuan ($70,500).

Applicants should have either a bachelor's degree or higher, over ten years of relevant experience and be no more than 45 years old, according to the announcement.

The tenure of office is three years. Those who pass the performance evaluation at the end of the term can renew their contracts.

Apart from the 500,000 yuan yearly salary, annual bonuses and tenure incentives will be awarded based on performance.