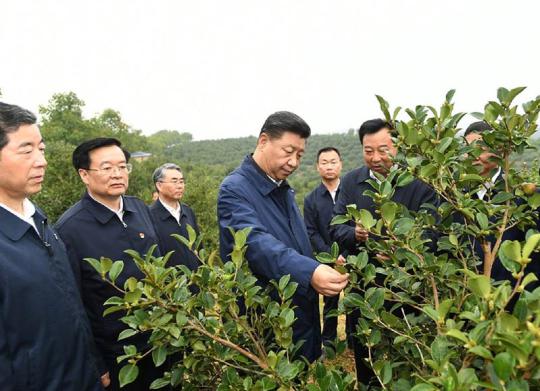 President Xi Jinping is emphasizing efforts to win the battle against poverty.

China should stick to its poverty alleviation target and make continuous efforts in the battle, Xi, also general secretary of the Communist Party of China Central Committee and chairman of the Central Military Commission, said on Thursday, National Poverty Relief Day.

The day was initiated by the State Council, China's Cabinet, in 2014.

China has nearly eradicated extreme poverty, an affliction for thousands of years. That is expected to contribute immensely to global poverty reduction, Xi said.

With the end of the battle near, he urged relief authorities at all levels to focus on bolstering impoverished people's access to basic public services, including compulsory education, healthcare, housing and safe drinking water, and make sure that all rural poor will shake off poverty on schedule.

Premier Li Keqiang said that authorities should strengthen relief measures, including fostering local industries, helping the poor get jobs and stepping up support for those relocated to new sites, so as to lift another 10 million people out of poverty by year's end and lay a solid foundation for establishing a moderately prosperous society in all respects by the end of next year.

A conference was held alongside the Global Poverty Reduction and Development Forum in Beijing on Thursday to mark National Poverty Relief Day and the 27th International Day for the Eradication of Poverty. The conference honored those who made huge contributions to the nationwide campaign to eradicate domestic poverty before 2021.

China has seen marked progress in poverty reduction in the past few decades, seeing the rural poor drop from 770 million around 1978 to 16.6 million by the end of 2018.

Since 2012, the central government has renewed the push to combat poverty, calling for local officials to adopt the targeted relief approaches tailored to local conditions, and with much success. More than 80 million people shook off poverty in the six-year period that ended last year.

Nicholas Rosellini, United Nations resident coordinator in China, said rapid economic growth is partly to be credited for change, but added that not all growth "will accomplish such a result". He said Chinese policymakers' constant attention to improving the rural population's lives lies at the core of what has made its economic growth so special.

"Of course, China has its spectacular cities, world-class high-speed rail, booming high-tech industries," he said. "But from the perspective of human development, the real China miracle has been the vast improvement in the lives of peasants across China."