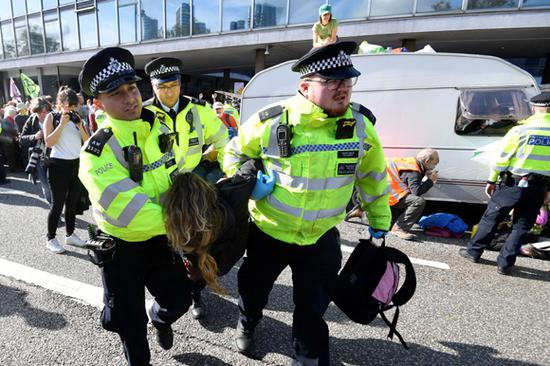 The number of climate change protesters arrested in London increased to more than 1,600 on Wednesday as the Extinction Rebellion group continued its civil disobedience campaign despite a city-wide ban on its demonstrations.

Lawyers for Extinction Rebellion submitted an application for a judicial review to the High Court for an urgent hearing later in the day to challenge the blanket ban on the group's protests across the British capital. The public order issued on Monday effectively bans more than two climate activists convening anywhere in the city.

The climate activist group on Tuesday defied the police by demonstrating throughout London. In response to Extinction Rebellion's protests, the government said it was already committed to achieving net-zero emissions and urged activists not to "disrupt people's day-to-day lives".

A government spokesman said: "The United Kingdom is already taking world-leading action to combat climate change as the first major economy to legislate to end our contribution to global warming entirely by 2050.

"While we share people's concerns about global warming, and respect the right to peaceful protest, it should not disrupt people's day-to-day lives."

Politicians, human rights groups and leading environmental figures including Greta Thunberg have condemned the ban as "unlawful" and "draconian".

A group of prominent claimants including members of Parliament Caroline Lucas, Clive Lewis, David Drew, and Ellie Chowns, a member of the European Parliament, as well as writer George Monbiot and activist Adam Allnut, brought the legal action on behalf of Extinction Rebellion.

On Monday, the police cleared people and all tents, gazebos and other structures from a designated protest site in Trafalgar Square, and continued to do so on Tuesday at other such sites in the capital after introducing the ban.

In a statement, Extinction Rebellion said: "This move by the Met (police force) is an unprecedented attempt to curtail peaceful protest" and called on Londoners to "assemble in Trafalgar Square for an Emergency People's Assembly that would discuss how to respond to the shocking silence of the government on the climate and ecological emergency in the Queen's Speech on Monday".