Ban on masks a 'legal deterrent to violence' 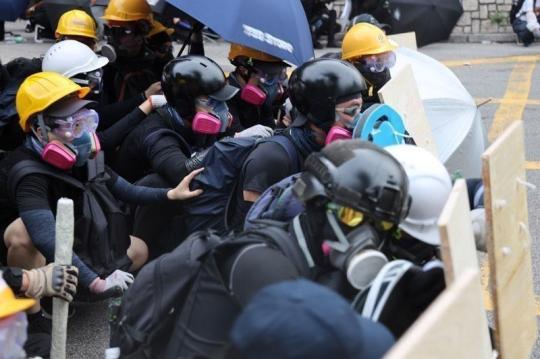 Experts on the Chinese mainland familiar with Hong Kong legislation said a new regulation in the city that bans facial coverings at protests and assemblies is reasonable and in compliance with legislative procedure.

The Hong Kong Special Administrative Region, invoking the Emergency Regulations Ordinance, put the Prohibition on Face Covering Regulation into effect last week after four months of violent protests and attacks in the city.

Radicals, who obstructed traffic, threatened innocent people and attacked police, protected themselves from the consequences of their crimes by wearing masks and helmets, with some even wearing gas masks.

The new regulation empowers police to stop a person wearing a mask in public and requires the removal of facial coverings. Anyone covering their face during a public meeting or illegal assembly will be held accountable for violating the ban and subject to a maximum penalty of a year's imprisonment and a fine of HK$25,000 ($3,200).

The regulation is aimed at stopping violence and helping restore social order in Hong Kong, but some people have claimed it affects people's right to protest and jeopardizes the region's autonomy.

Zou Pingxue, a professor specializing in Hong Kong's Basic Law at Shenzhen University, said the regulation sent a clear message to society that people cannot hide behind a mask, while still protecting citizens' rights to express their opinions openly and legally.

About 15 countries had enacted anti-mask laws, including the United States, Germany, France and Canada, and they had proved effective.

Zou said it was right and proper for the Hong Kong Special Administrative Region government to use local legal resources to restore social order.

"The ban will help reduce the level of violence and bring more people back to rationality," he said. "It not only deters young people from illegal behaviors but also protects them."

Tian Feilong, a legal expert at the "one country, two systems" center at Beijing's Beihang University, said the regulation was an important legal step for Hong Kong to stop violence and control disorder in accordance with the law.

"It provides a stronger legal basis and power for the police to enforce the law and also acts as a psychological and legal deterrent to criminal violence," he said.

Tian said the anti-mask regulation was the first administrative regulation promulgated by the Hong Kong Special Administrative Region government under the city's Emergency Regulations Ordinance, which empowers the chief executive to make regulations to deal with public security hazards.

"The legislative process of the new regulation is different from the routine enactment of legislation," Tian said. "Simply, it took effect first and then will be subject to negative vetting. It remains valid as long as it's not rejected by over half of the lawmakers.

"It is a preliminary attempt of the SAR government to end the disorder, and if the violence continues to escalate, it can take further steps supporting police enforcement so as to provide more protection to citizens."