When nature becomes a stage(1/6) 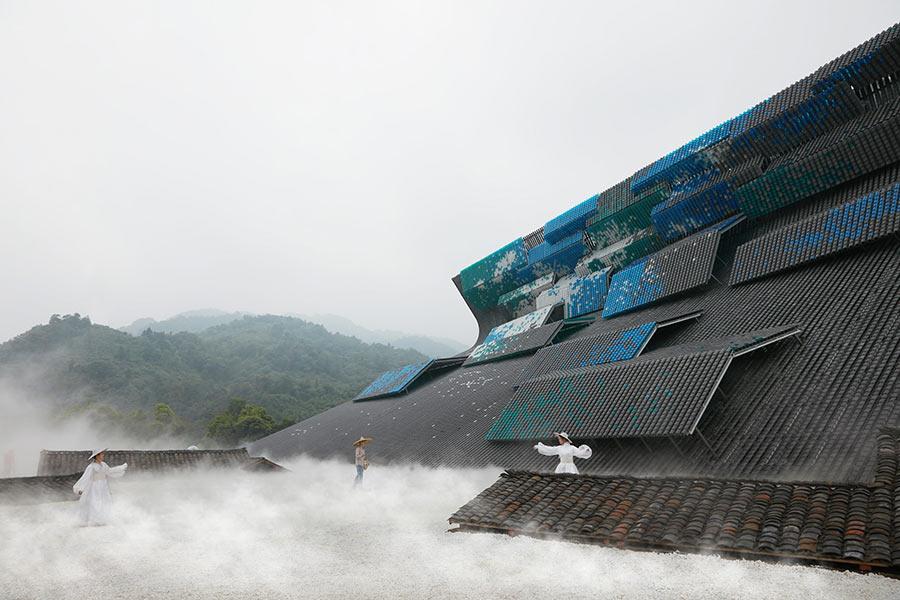 Unique Mount E'mei is the first installment of the Unique series of director Wang Chaoge. (Photo provided to China Daily)

Above the ground covered with small white stones are several tile-eaves, as if the actual houses are buried inside the whiteness. With fog arising from the ground, you can stroll around to see people from all walks of life - a fortune-teller, an elderly porter, a monk sitting on the ground and four people playing mahjong on a table.

The scene is a prelude to the recently premiered Unique Mount E'mei, which is set in the mountain in Sichuan province. And these performers represent people's lives in the sea of clouds.

After that, the audience sees a performance with holographic projection and can walk around for several immersive shows where they can watch performers closely and interact with them. 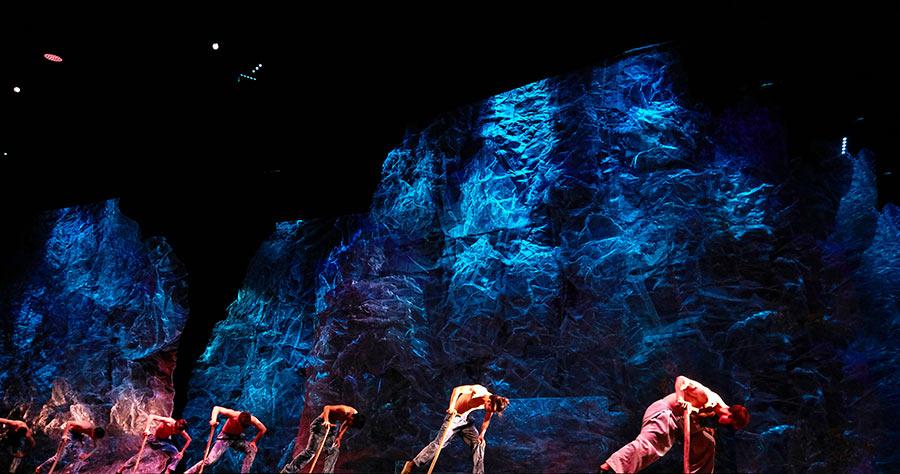 Holographic projection is used in the Unique Mount E'mei show to showcase the beauty of traditional Chinese aesthetics. (Photo provided to China Daily)

The show combines the mountain's history and Buddhist culture, with traditional Chinese values.

Unique Mount E'mei is the first installment of the Unique series of director Wang Chaoge and she also plans to produce a show in the series based on classic Chinese novel Dream of the Red Chamber.

"I want to excel using innovation. This production showcases the beauty of traditional Chinese aesthetics," she says.

Speaking about her work, she says: "Artists and audiences should be equal. So, I don't intend to educate anyone. I just share my opinions in my work, which appeal to both refined and popular tastes."

Holographic projection is used in the Unique Mount E'mei show to showcase the beauty of traditional Chinese aesthetics. (Photo provided to China Daily)

In 2003, Wang codirected Impression Liu Sanjie with Zhang Yimou and Fan Yue, and it remains one of China's most popular and profitable tourist shows. The Impression series are not indoor. And they're all set on famous mountains or the banks of rivers or lakes, which serve as the natural stage backdrop.

Separately, in 2013, Wang produced Encore Pingyao in ancient Pingyao city, in Shanxi province. And it was the first time that she invited the audience to walk around in a space to watch performance, rather than being seated. After that, she produced the Encore series at popular destinations such as Dunhuang in Gansu province and Mount Wutai in Shanxi province.

For her current show, Wang and her team renovated Gaohe village at the foot of Mount E'mei into a 20,000-square-meter theater, with 27 courtyards, 48 houses and 395 rooms. And villagers have been relocated. 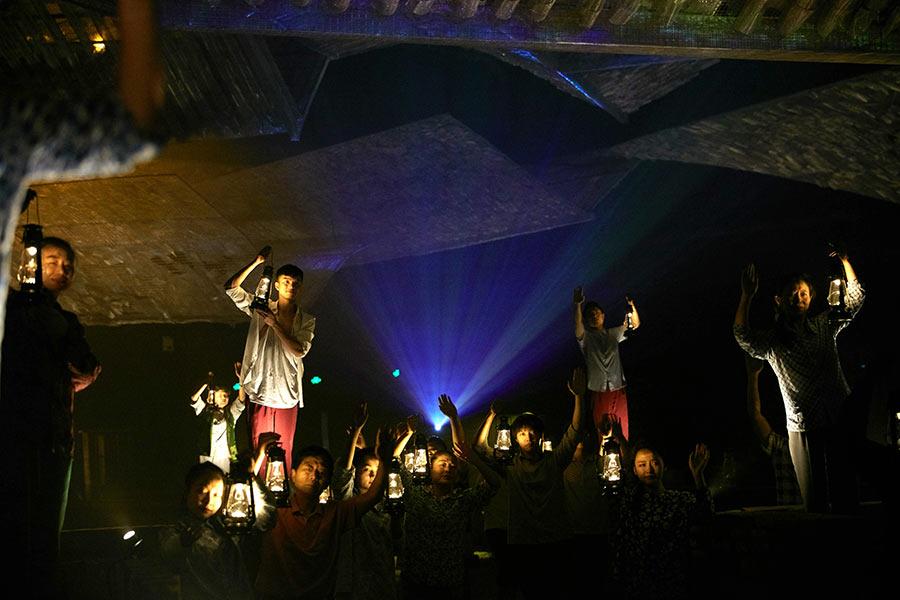 Holographic projection is used in the Unique Mount E'meishow to showcase the beauty of traditional Chinese aesthetics. (Photo provided to China Daily)

The story is set in 1980, two years after China's national policy of reform and opening-up was launched. And the audience sees dramas in several courtyards based on a true story about a construction company from Shenzhen, in Guangdong province, which came to the village to hire workers.

For young villagers at that time, it was a once-in-a-lifetime chance to move away from being farmers in the mountains. And they are longing to go to the big cities to ensure a better lifestyle for their family. And they don't know they will never be able to overcome their yearning for home.

Viewers are divided into two groups and each group watch three different dramas. As the production team prepared 17 dramas in total for the show, it means that one will have to watch the show at least six times to see all of it.

After the performances, the audience can roam around the village freely and interact with the performers such as a barber, a street vendor and an old man playing Chinese chess. And the performers will share handwritten letters with the audience about things that weigh on their minds - for example, about a daughter's memory of her father, a soldier who does not return.

The stage includes people from all walks of life on Mount E'mei. (Photo provided to China Daily)

Wang Ge, who's in charge of architecture, says the village has the capacity to host an audience of 1,000 people.

And to ensure safety the team have reinforced the old residences while maintaining their original appearance.

Wang Chaoge has also recruited some elderly villagers for the show, and she and her team lived in the village with them for months to train them.

One of the elderly actors, who is in his 60s, is surnamed Zhang. Earlier, the man, who was a driver, used to play mahjong - a popular form of amusement among people in Sichuan province - to kill time. Now, he's glad that he can be an actor in the show and he likes his new lifestyle. 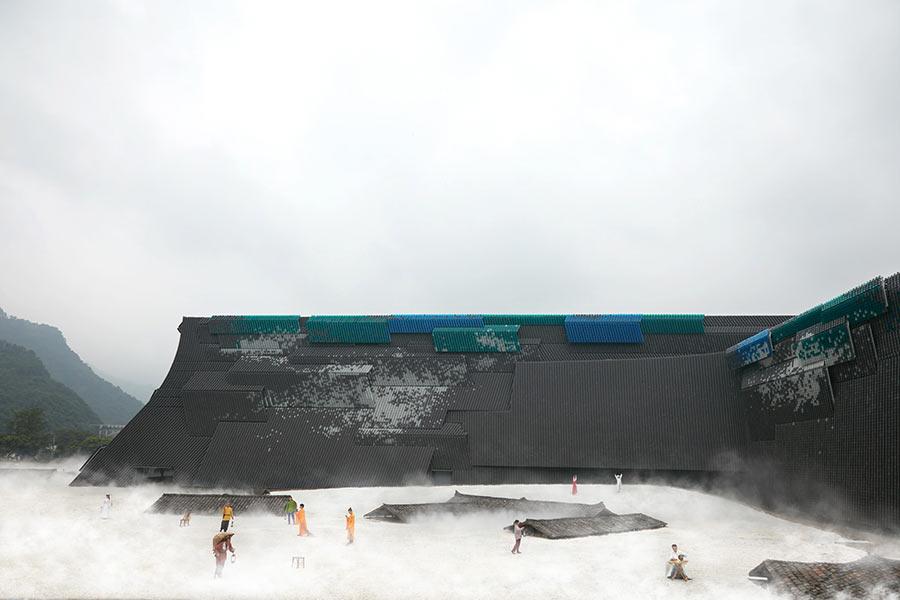 Unique Mount E'mei is the first installment of the Unique series of director Wang Chaoge. (Photo provided to China Daily)

Speaking about the plan to involve the elderly in the show, Wang Chaoge says: "It's very energy-consuming to teach old villagers how to act. It takes more time for them to master one simple movement because they have no idea about the basics. For example, they always avoid eye contact while talking to you.

"Initially, my colleagues wanted to hire new performers but I persuaded them to go for those who were born and bred there. Actually, they're acting themselves in the show. And it turns out I'm right."

Wang Chaoge hopes that Unique Mount E'mei will touch tourists and arouse their interest in the mountain's culture and history.

"I don't like the attitudes of those who travel to Mount E'mei only for photos or to see monkeys. It's a UNESCO World Heritage site, and it's better to come here for its culture rather than just entertainment."