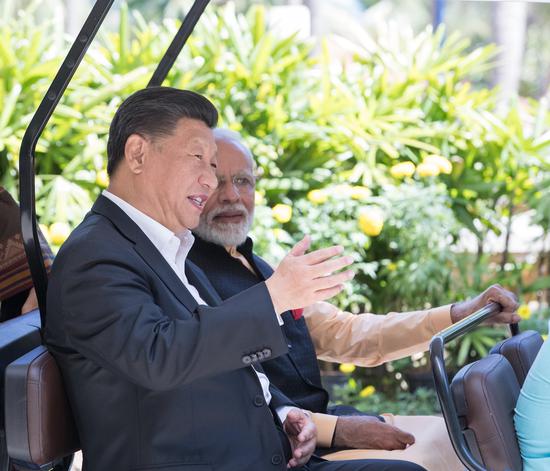 China and India can create an even closer partnership in the new era, as the countries' leaders have reset relations through an informal meeting over the weekend in the coastal city of Chennai in southern India, officials and experts said.

Xi called for building up strategic mutual trust between the two neighboring countries and defusing their differences through communication. He said the only correct choice is for the "Chinese dragon" and "Indian elephant" to dance together in ways that serve the interests of both countries.

Xi also called for earnest efforts to raise the level of military exchanges and security cooperation to enhance mutual trust between the two militaries and safeguard regional security and stability.

For his part, Modi said that in light of the uncertain international situation, maintaining stable India-China relations is positive and significant not only for the countries but for the world at large. He underlined the need to consider each other's major concerns and properly manage and control differences to prevent them from escalating into disputes.

The two leaders reaffirmed that both sides will remain committed to upholding peace and tranquility in the border areas, and will also jointly discuss and work out more trust-building measures, Luo said.

The second informal meeting came as some thorny issues have cropped up in bilateral ties, such as a boundary dispute and trade imbalance. It also took place at a time when the regional and international landscapes are undergoing complex changes.

Ruan Zongze, executive vice-president of the China Institute of International Studies, said understanding each other's strategic purposes and properly managing differences are crucially important in the relations of the two neighbors.

The two leaders agreed to set up a new high-level mechanism for dialogues on trade and economic issues to further promote balance in cooperation.

China is keen to make investments in India, while India wants greater market access in China, as well as action by Beijing to address the trade imbalance. It has agreed to expand imports of rice and sugar from India.

Xi told Modi during their meeting that Beijing welcomes investment in China by Indian pharmaceutical and information technology companies.

Stanly Johny, an international affairs editor of The Hindu newspaper, wrote in an article that the avenues of economic cooperation between the two countries remain wide open. "They could come up with a plan to take economic ties to the next level, addressing mutual concerns," Johny wrote.

Both Xi and Modi emphasized the importance of having a rules-based global trading system, as well as cooperation between China and India on important regional and global issues — both being the pillars of emerging markets and champions of multilateralism.

Sujan R. Chinoy, a China expert and director general of the New Delhi-based Institute for Defence Studies and Analyses, said there is no denying the fact that India and China must work together to forge stable relations in which competition does not lead to conflict nor differences to disputes.

Noting the maturity of Sino-Indian ties, Chinoy said both countries are keen to deepen engagement and bring stability and predictability to their relations, and it's in the interests of the two peoples that there is greater trust and cooperation and deeper friendship at all levels.

The first informal summit between Xi and Modi took place in Wuhan, Hubei province, in April last year. That meeting helped ease tensions arising from the standoff between the two militaries in Doklam, in the border area, and rebooted bilateral ties. This time, they agreed to hold the next informal meeting in China.

Experts said the informal nature of the leaders' meeting will continue and deepen contacts at the highest level and guide the future trajectory of China-India relations.