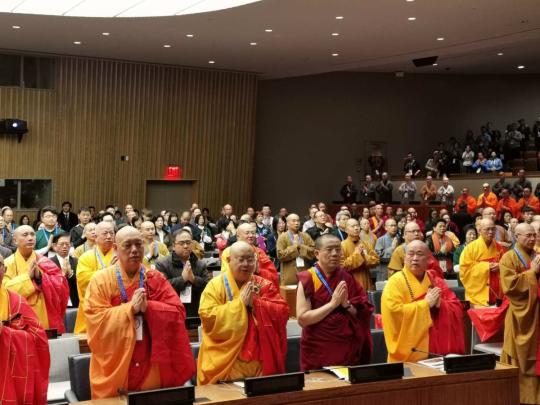 Representatives of Buddhist communities from China, the United States and Canada, attend the 2019 China-U.S.-Canada Buddhist Forum on Saturday at UN headquarters in New York. They discussed efforts to build a community of a shared future for mankind. (China Daily/Hong Xiao)

Representatives of Buddhist communities from China, the United States and Canada, held a forum at UN headquarters in New York to discuss efforts to build a community of a shared future for mankind.

The 2019 China-U.S.-Canada Buddhist Forum was held on Saturday, the second gathering after the initial one was successfully held in Canada in 2017. During the one-day event, guest speakers shared views on how to expand the positive impact of the Buddhist communities of the three countries. Lectures and discussions promoted mutual understanding and mutual learning between Buddhism and modern civilization.

Venerable Master Yanjue, vice-president of the Buddhist Association of China in Beijing, said in opening remarks that on Oct 24 the UN will celebrate its 72nd United Nations Day.

"The United Nations is the most universal, representative and authoritative intergovernmental organization. It has been playing an important role in the global governance," he said.

"The purpose of the United Nations tallies with the common value and principle of all major world religions. Kofi Annan, former UN secretary-general once proposed, when major religious and spiritual leaders in the world join hands to call for world peace, it will bring about a vision for peace in the new millennia," he said.

The Buddhist tradition with its long history of 2,563 years has been advocating compassion, equality, tolerance and peace, said Yanjue.

"It has been endeavoring to eradicate fundamentally the prejudice and misunderstanding among people, providing effective and feasible solutions for various civilizations to coexist with and accommodate each other, and dissolve cultural conflicts between them," he emphasized.

The world is facing great changes unprecedented in a century, Yanjue said, pointing out that peace, development, cooperation and win-win situations remain main themes of the times.

Under such circumstances, "the Buddhist circles of China, U.S. and Canada join hands to hold this Buddhist forum, conduct friendly exchanges and cooperation, practice their loving-kindness and compassionate vows to devotedly maintain world peace, promote exchange and mutual learning between human civilizations, and enhance the welfare of all beings'', he said.

"This is of great significance to furthering religious and cultural exchange, enhancing understanding, mutual trust and friendship between people of the three countries, and even promoting cultural exchange and mutual learning between the East and West and establishing a human community of common destiny,'' he added.