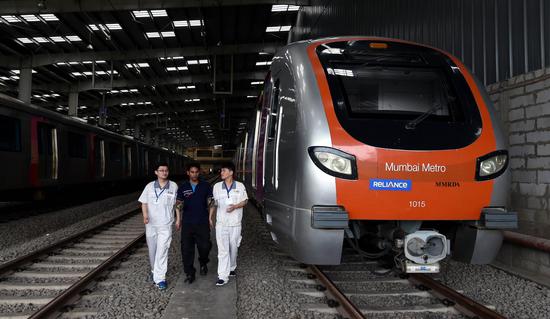 Luo Zhaohui, vice-minister of foreign affairs, said at a news conference that Xi's first overseas trip after the celebration of the 70th anniversary of the founding of the People's Republic of China will greatly influence bilateral and regional relations.

Xi was invited by Indian Prime Minister Narendra Modi and Nepali President Bidhya Devi Bhandari. He will attend a second informal meeting with Modi in Chennai on Friday and pay a state visit to Nepal from Friday to Sunday.

Cooperation between the two most populous nations will not only be helpful to each other's development but also contribute to a more multipolar world and economic globalization, Luo said.

Xi and Modi held their first informal summit in Wuhan, Hubei province, in April last year. In that meeting, the two leaders were widely in agreement on bilateral and multilateral relations.

"During the two leaders' Wuhan summit, they had very good chemistry," Luo said.

Since then, China and India have pushed forward exchanges in all areas and properly handled their disagreements, Luo said. Bilateral ties developed steadily after the two leaders' first summit, he said.

In Chennai, Xi and Modi, without having set a formal agenda, will have discussions in an easy, comfortable atmosphere, according to Luo. The summit is meant to promote practical cooperation between the two countries and create a long-lasting influence on global and regional peace and stability, he said.

Luo said that Xi's state visit to Nepal is the first by a president of China to the South Asian neighbor in 23 years, giving it historical significance. Hailing Nepal as an important partner of China in building the Belt and Road, Luo said that the two countries have treated each other equally, practiced mutual respect and supported each other over decades.

During the visit, Xi will attend a welcoming ceremony and banquet hosted by Bhandari, meet with her, have a talk with Nepali Prime Minister KP Sharma Oli, witness the signing of cooperation documents and meet with other leading officials of Nepal, Luo said.

"The role of the two leaders is extremely important for the sound development of our relations," he said, noting that Xi and Modi met five times last year on different occasions.

B.R. Deepak, a professor at the Centre of Chinese and Southeast Asian Studies of Jawaharlal Nehru University, said the Wuhan summit injected great momentum into people-to-people exchanges between China and India.

"I am sure that people-to-people contacts will be an important area that both the leaders will lay emphasis on," he said while talking about the Chennai summit.