China not to sit idly by facing rampant unilateralism: FM 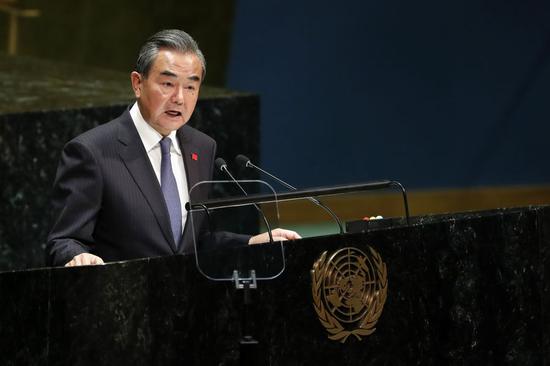 Chinese State Councilor and Foreign Minister Wang Yi addresses the General Debate of the 74th session of the UN General Assembly at the UN headquarters in New York, on Sept. 27, 2019. (Xinhua/Li Muzi)

In his speech at the General Debate of the 74th session of the United Nations General Assembly, Wang said that the international order needs to go by laws and rules, and acts in violation of international norms can only plunge the world into chaos.

Opportunities arising from the new round of scientific and technological revolution are opportunities of the world. Advances thus made should not be monopolized by any single country, and no one should obstruct the efforts of other countries to make innovations, he added.

"It is not legitimate or justifiable for any country standing from a position of power to impose unilateral sanctions or exercise long-arm jurisdiction over other countries, as such practice has no basis in international law," he noted.

To put one's own interests above the common interests of all other countries is a typical bullying practice that finds no support of the people, he said.

The Intermediate-Range Nuclear Forces (INF) Treaty is important in upholding global strategic balance and stability. Unilateral withdrawal from it will cause multiple negative impact, he pointed out.

"China is opposed to the deployment of land-based intermediate-range missiles in the Asia Pacific. We urge the countries with the largest nuclear arsenal to fully fulfill its special and primary responsibilities in nuclear disarmament. China will continue to take an active part in the international arms control process," he said.

"I announce that China has initiated the domestic legal procedures to join the Arms Trade Treaty," the Chinese top diplomat said.