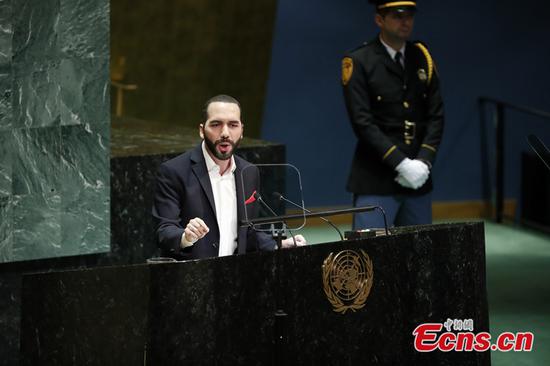 El Salvador's President Nayib Bukele on Thursday urged the United Nations to make a change in the format of its annual gathering and take better advantage of the Internet.

Before starting his maiden speech at the UN General Assembly, the 38-year-old president took out his cellphone and posed for a selfie before the audience.

"Standing here before all of you at this 74th General Assembly is a privilege and an honor that I want to share with the world," he told the General Debate, giving his view about the power of social media.

The photo would be seen and shared on social media platform, a network "where billions of people are connected in real time and share almost every facet of their lives," he said.

"The Internet is increasingly becoming the real world," he said, calling on the world body to change with the times.

He suggested that the UN hold the meetings through video conferences so that people will no longer travel a long way to gather in New York.

Bukele was the former mayor of the capital, San Salvador. He took office in June.