UnionPay banks on its innovation to up global influence 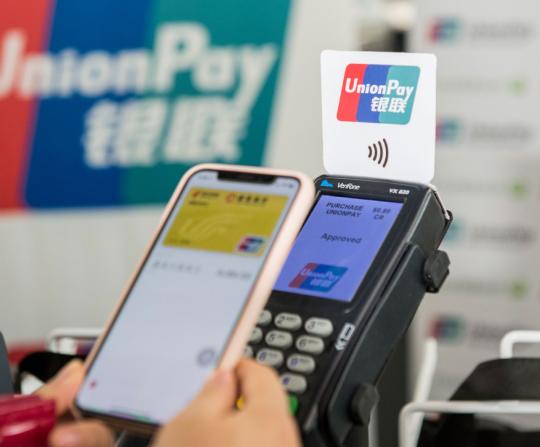 UnionPay's mobile payment services are available in 48 countries and regions. [Provided to chinadaily.com.cn]

The upcoming seven-day National Day holiday will be the longest public holiday in China during the second half of 2019. It will also be the peak of Chinese tourists' outbound travelling.

Australia, wowing visitors with its amazing natural landscapes, will again become one of the most popular destinations for Chinese tourists during this holiday. To Australian merchants who often welcome Chinese customers, the name of "UnionPay" sounds as familiar as "ni hao".

According to a Nilson report released in 2017, UnionPay has become the world's largest payment network by cards in circulation and purchase volume. UnionPay's fast-growing global influence can be attributed to the continuous expansion of its acceptance network, issuance scale and rolling out of mobile payment services worldwide.

This year marks the 70th anniversary of the founding of the People's Republic of China. As China's economy grows, the number of Chinese people travelling overseas has also increased. These tourists' strong purchasing power has driven UnionPay, a card organisation established in 2002, to become a pioneer in the world's payment industry.

UnionPay has enabled card acceptance in 174 countries and regions as well as card issuance in 56 countries and regions. In Australia, for instance, 90 percent of ATMs and 80 percent of merchants accept UnionPay cards. In New Zealand, over 60,000 merchants accept UnionPay. It is said UnionPay's presence in the two countries has benefited both Chinese tourists and local businesses such as Woolworths and Countdown.

UnionPay plays an important role in supporting the Belt and Road Initiative. UnionPay is accepted in 106 countries and regions which are taking part in the BRI, involving more than 12 million local merchants and 800,000 ATMs.

With its service network expanding worldwide, UnionPay is not only usable outside the Chinese mainland, but also preferred. More types of businesses are also accepting UnionPay to welcome Chinese customers. Take tourism-related businesses as an example: over 70 international airlines, including Australia's Qantas, have begun accepting UnionPay Online Payment. UnionPay is supported by leading hotel groups including Four Seasons and The Peninsula Hotels .

With more than 7.5 billion UnionPay cards issued in 56 countries and regions, UnionPay's influence goes far beyond China. UnionPay has become the No 1 card brand in Laos, Mongolia and Myanmar in number of cards issued. Portugal's Millennium BCP was the first European bank to issue a UnionPay card in 2018.

With more customers worldwide signing up for UnionPay cards, UnionPay is playing an increasingly important role in their daily life and international travels. UnionPay cards have become payroll cards, student cards or citizen cards in the United Arab Emirates, Russia, Kenya, Belarus, and the Philippines, among other countries. 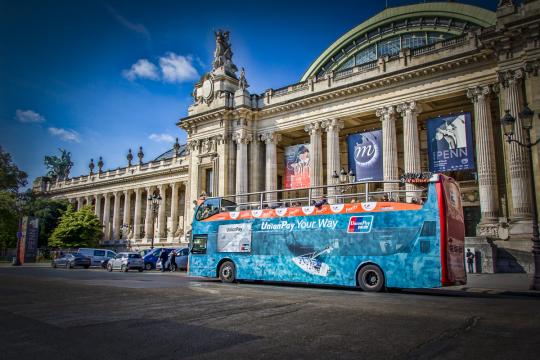 A bus carrying an advertisement for UnionPay's services in London. [Provided to chinadaily.com.cn]

UnionPay has developed a variety of mobile payment products and solutions, including the UnionPay app-based QR Code payment and UnionPay mobile QuickPass, in response to the worldwide digital revolution.

In particular, the UnionPay app, a unified mobile payment app released together with commercial banks and payment institutions in China, had accumulated about 200 million users as of early September.

In September 2018, UnionPay extended its app service to cardholders in China's Hong Kong and Macao, to meet local customers' increasing demands for safe and easy mobile payments as connectivity to the mainland intensifies.

UnionPay also introduced its digital wallet solutions in more than 17 institutions across 11 countries and regions including Southeast Asia, the Middle East and China's Hong Kong and Macao. The e-wallet solution is helping to localise UnionPay's mobile payment services to meet the needs of cardholders to make scan-and-pay transactions.